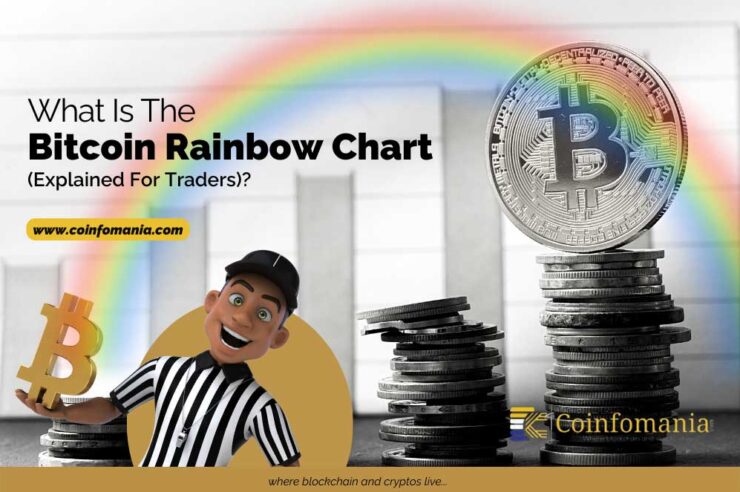 You can also use this metric to predict the price action of other cryptocurrencies, making it a very important tool. Something of this much value may sound new to noobies as well as long-term traders who know nothing about it. This article will provide a proper introduction and all you need to know as we will consider the following:

What is the Bitcoin Rainbow Chart?

Bitcoin is one of the oldest tools designed by Reddit user Azop. He created the chart to provide a better view of BTC’s long-term movements by drowning out daily volatility. He described it as a “fun way of looking at long-term price movement.”

Looking at the rainbow chart, you’ll notice a line moving within the pool of colors. It is interesting to note that each color has its own meaning. How can you read them?

How to Interpret the Bitcoin Rainbow

Reading the chart is easier once you know what the individual colors mean. This can help you decide when to buy or sell your assets. We will go over the meaning of these hues from top to bottom.

Red: This is the highest in the pool of colors. The price indicator (the line) enters this level at the peak of a long-term uptrend. It means the BTC bubble is nearing its end and the apex coin is due for a correction. It is unsafe to buy in this region.

Light red: This is the second stage of warnings. It establishes that bitcoin is in a bubble that may intensify or burst. It means the value of the apex coin is more than the healthy price mark. At this point, it is advisable to sell your bag.

Orange: This is the first stage leading to a bubble. Many refer to this region as the FOMO phase. It indicates an impending bubble or a crash. It is advisable to do extensive research before executing any trades when the Bitcoin rainbow chart is in an orange zone.

Light orange: Once prices enter this level, it shows that the asset is gradually building momentum. This may lead up to the next stage, as such it is important to do extensive research before going into any trades. Additionally, it can retrace.

Yellow: This color is between the bearish and bullish sides. In other words, this hue is neutral. In response, you may decide to hold on in anticipation of further uptrends.

Lime: At this level, BTC is on an uptrend and has reached its full potential. You decide to ride the sentiment as more increases are almost certain.

Green: Once prices rise in this region, it means a long-term uptrend is locked in and assured. In response, you may accumulate more crypto and wait for the rallies.

Blue: Buy! Buying at this point is cheaper as BTC is undervalued.

Indigo: Buy!!!, this is the most bullish signal to increase your BTC bag. However, prices may linger in this region. Nonetheless, an uptrend is certain.

It is important to always remember that Bitcoin Rainbow Chart is only for long-term trades. It is also important to note that the tool is based on logarithmic regression; a regression that depicts growth or decay.

In this context, it depicts potential levels to buy or sell. The price indicator (or line) is one of the most important components in this tool as it helps gauge these levels. The previous section of this write-up highlights what each level means.

Using these color specifications and noting where the current price is will highlight current market sentiments. According to each hue, you can decide the next price actions

Ethereum Rainbow chart is almost the same as the BTC’s. It is logarithmic regression-based and depicts different sentiments affecting the asset at a given time. Interestingly, the developer is the same as the bitcoin.

Like the latter, it also has different colors with different meanings. They are pink, orange, light orange, yellow, lime green, bright green, sea green, and indigo. Here is what they mean

Pink: This is the peak of a bull run. It is also the maximum bubble territory. This is a clear indication that the largest alt is due for corrections. You may decide to sell at this point.

Orange: This is the first stage of the price bubble. The chart instructs you to check BTC before making a decision.

Light orange: This phase is the build-up to a bubble. It is popularly referred to as “But have we *earned* it?”

Yellow: It is considered the healthiest part of the bullish dominance. At this stage, traders wonder, “Is this the Flippening?”

Lime green: Neutral. There may be price increases after this phase. Nonetheless, it is referred to as the Altseason.

Sea green: The bull’s run is locked in and assured. Accumulate.

Blue: Buying at this point is cheaper as Ethereum is undervalued.

Is the Bitcoin Rainbow Chart Accurate?

No tool promises 100% accuracy on all predictions. The Bitcoin rainbow chart falls on this list. Nonetheless, a look at previous assessments makes this tool a little more reliable. We settle for an 80% accuracy.

It failed a few times as prices broke out of the logarithmic regression. One such was in November 2013 when BTC surged above the red region. Traditionally, the lines must stay within the curve and a breakout meant it exceeded the boundary.

The highest hue indicates that the price bubble will burst but the 2013 event defied it. We also saw another in 2020. Although this time, it was to the bearish side. Aside from these few events, there were no other breakouts.

One of the most accurate performance periods was in 2018 when prices entered the red region and retraced a few days later. We also saw a build-up to the bubble that failed in 2021 as BTC failed to surge past the light orange region.

Who Created the Bitcoin Rainbow Chart?

Like most things related to bitcoin, a volunteer made the chart. In 2014, a Reddit user, Azop, made the first chart with different colors. The main purpose was to have something that tracked BTC price trends.

Due to how colorful the chart was, people nicknamed it the “Bitcoin Rainbow Chart.” Following the success of this project and how accurate it was, others sort to improve it with other features.

One of the biggest names was Trololo. A Reddit user as well created the basic logarithmic regression in 2014. Uber Holger, another user, made more updates to the chart and uploaded it to Blockchain Center. 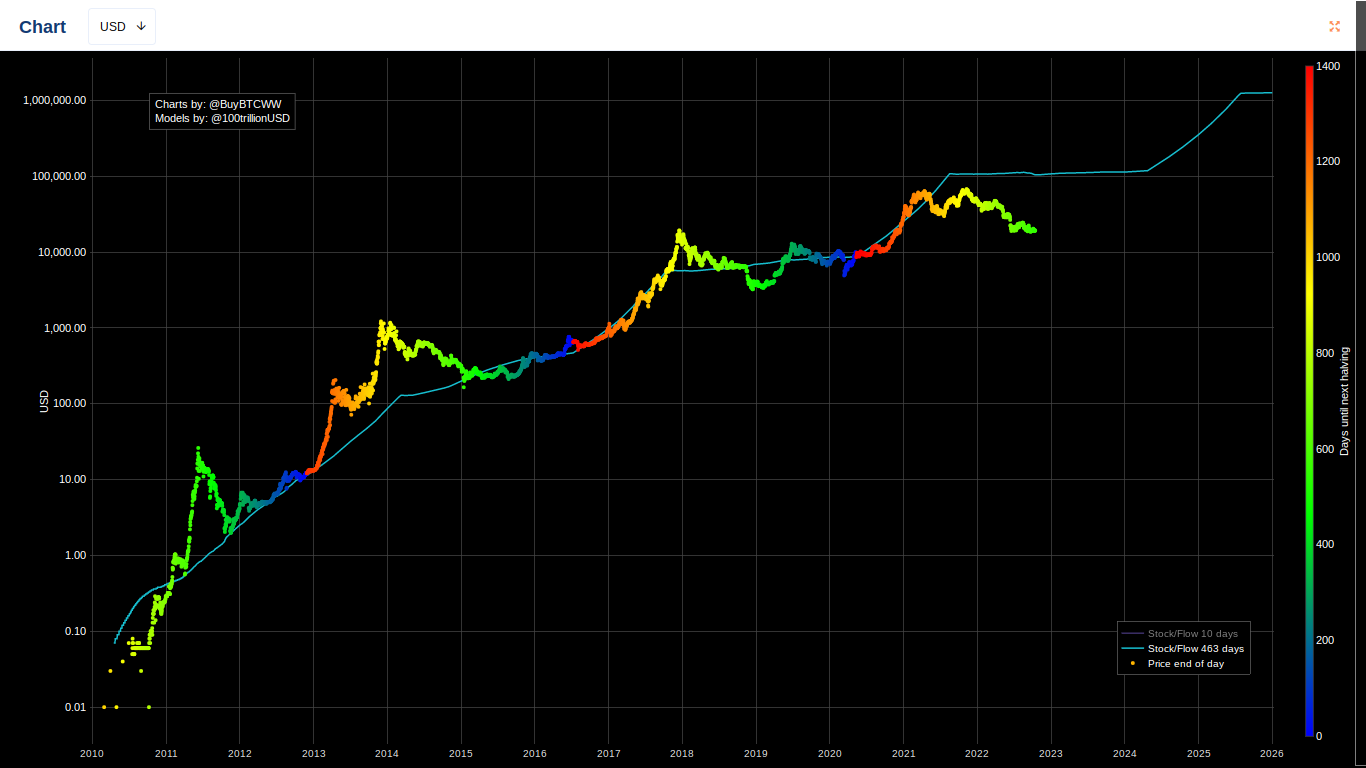 The previous paragraph established that the S2F model depends largely on demand and supply. However, BTC rainbow chart does not depend on this model to offer predictions.

The stock-to-flow model offers predictions after every halving. Based on previous movements, these predictions were inaccurate. Measuring the success rates and failure, it offers 60% accuracy.

Meanwhile, the rainbow chart offers more in terms of accuracy. This chart details more in terms of when to take action. For example, when prices are in the red region, the bubble is nearing its end, and while in blue, it is an alert to buy.

The S2F chart does not offer these details. It is safe to say that the bitcoin rainbow chart is more beginner-friendly than the latter. The stock-to-flow model is only updated after every halving and would not change (except the current price) until this event. The rainbow chart updates daily in line with current price movements.

This article explained what the bitcoin rainbow chart is. We went over the dominant features and what they mean. We also discussed how to interpret the chart and understand it.

Ethereum rainbow chart was another intriguing topic the article covered. We went over the interpretation of each color. It also answered the question of how accurate the BTC rainbow chart is where we saw some instances when it failed and some succeeded.

The last two sections of the write-up covered the development of the chart and some advantages it has over the S2F model. It further highlighted what stock-to-flow is and how to derive it.

Information contained in this article should not be construed as financial advice. Every trader must do their research before drawing any conclusions.