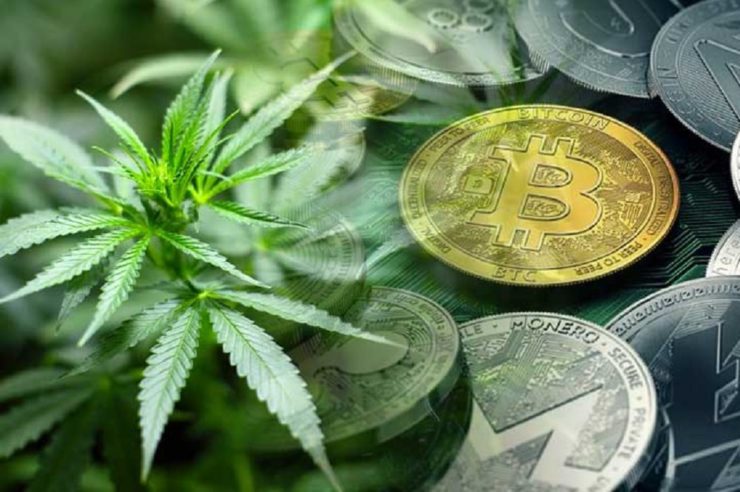 While cryptocurrency and legal cannabis are different industries, both face similar challenges, especially from the financial, political, and regulatory side of things.

As these two industries continue to see significant growth despite the many struggles from all corners, we have noticed that they also share a similar user base as they are both popular among the younger generation.

But more interestingly, the cryptocurrency industry and the legal cannabis industry have the same business model, which can help foster the widespread adoption of both industries.

Access to financial services has always been a problem for the legal cannabis industry, especially in the United States. Even though marijuana has been made legal in many states across the country, local banks are still leery of providing their services to businesses in the industry just because cannabis is still illegal at the Federal level. This involves other ancillary industries tied to cannabis like vaporizers, CBD, and much more.

This is why legal marijuana dispensaries and other cannabis-related businesses in the US have to deal on a cash-only basis like it is some kind of black market.

Why Cryptocurrency is Taking Over the Cannabis Industry

Although a bill known as the Secure and Fair Enforcement (SAFE) Act was proposed earlier this year to finally give the cannabis industry access to banking and other financial services, it will likely not come into play in 2019 or anytime soon. Why?

The new bill will indeed have all the support it can get to make it through to the House of Representatives, but the Senate? Not sure about that as there is a need to worry about the members of the “Grand Old Party” of the upper chamber.

The bill receiving consideration from them is very unlikely, plus they might want to do everything to ensure it doesn’t go forward, at least not when the gatekeeper of the Senate is still Mitch McConnell, a man who is not at all a fan of cannabis, and he decides what bill is put out for voting.

But is access to traditional banking services the only way to turn the situation around in the “unbanked” $250 billion global cannabis industry? Welcome to cryptocurrency!

The crypto industry is only ten years old and is already a threat to traditional banks and financial institutions. Based on blockchain technology, cryptocurrencies are fast filling the vacuum of conventional banking systems by acting as an alternative medium of exchange and store of value for the unbanked, which makes them a perfect solution for the cannabis industry.

Although the cryptocurrency industry is currently worth $263 billion, the adoption rate of digital currencies is still low due to their unstable price movements.  This is why merchants are afraid of accepting them as payments.

However, times are changing fast, thanks to crypto payment processors like Bitpay and Flexa, more merchants across all industries, including the marijuana industry are now accepting cryptocurrency payments like Bitcoin, Monero, etc.

Interestingly, there are a few other cryptocurrencies that focus on the cannabis industry as a means of exchange.

PotCoin (POT) is one of the first digital currencies created to serve as a payment solution for the legal marijuana industry. It is a proof-of-stake cryptocurrency that was launched in 2014 but did not reach spotlight until 2017 when a press release was made, and American basketball player Dennis Rodman was seen in a video wearing a Potcoin.com shirt.

Just like Potcoin, CannabisCoin was also launched five years ago to make transactions a lot easier for legal dispensaries. CANN is an open-source, peer-to-peer cryptocurrency designed for instant payment. However, it has failed to meet up to expectations despite the initial popularity it gained a few years after its launch.

The project uses a system called CANNdy, which allows the direct conversion of the coin to marijuana in a 1:1 basis. In other words, 1 CannabisCoin can be used to purchase 1 gram of marijuana.

Also created in 2014, DopeCoin is a decentralized cryptocurrency and payment system with a mission to “provide marijuana enthusiasts with a modern and secure way of doing business for the 21st century” with zero costs, speed, and privacy.

The cryptocurrency was later rebranded to DopeCoin Gold, and all the old coins became worthless as at February 2018. The coin uses a Proof-of-Stake system and holders receive a 5% annual interest on their holdings.

The project recently announced that they are diversifying into other industries such as Big Pharma, Crypto, Gambling/Betting, Alcohol, and many more, instead of focusing solely on the marijuana industry.

Hempcoin was developed in 2014 to facilitate transactions between cannabis farmers and legal dispensaries. It is also designed for use in purchasing tools and equipment used by farmers in marijuana farms, and other areas of agriculture.

Developed in 2014, CannaCoin is a decentralized peer2peer system similar to Bitcoin designed for transactions at every stage of production in the cannabis industry without the need for a third party. The project describes itself as “the future of the cannabis industry.”