The under-listed altcoins are in bear markets. The general breakdown in the crypto markets is contributing to the downward movement of the coins. The cryptocurrencies lack buyers at higher levels. However, the Holo coin is exceptional among the listed altcoins as it continues to consolidate among the others.

Bitcoin Cash has been on a downward move after the last breakdown on June 11. Buyers were making frantic efforts to push above the $260 resistance before the breakdown. The market fell to $232 low and the bulls made an immediate pulled back. Since then BCH has been trading below $240 resistance. 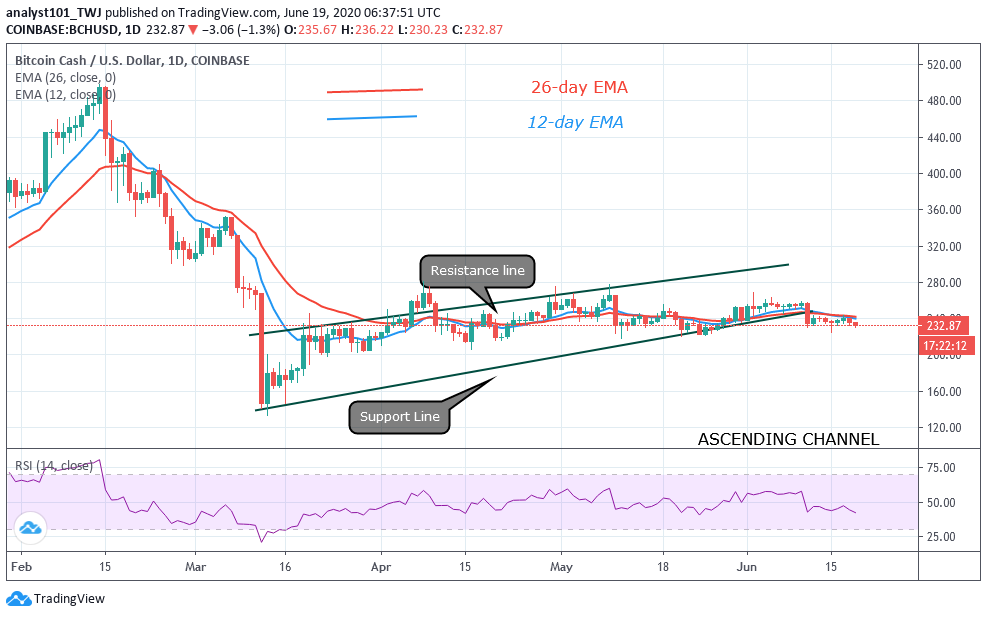 On the upside, a break above the $240 resistance will ensure an upward move of BCH. In other words, the breaching of the downtrend line and the subsequent upward move will accelerate the upward movement of the coin. There is also the possibility of retesting the $260 and $268 resistance level.

However, if buyers fail to break the downtrend line, BCH will continue to trade below the $240 resistance. The coin is presently at level 45 of the daily Relative Strength Index. It indicates that the coin is in the downtrend zone and below the centerline 50. 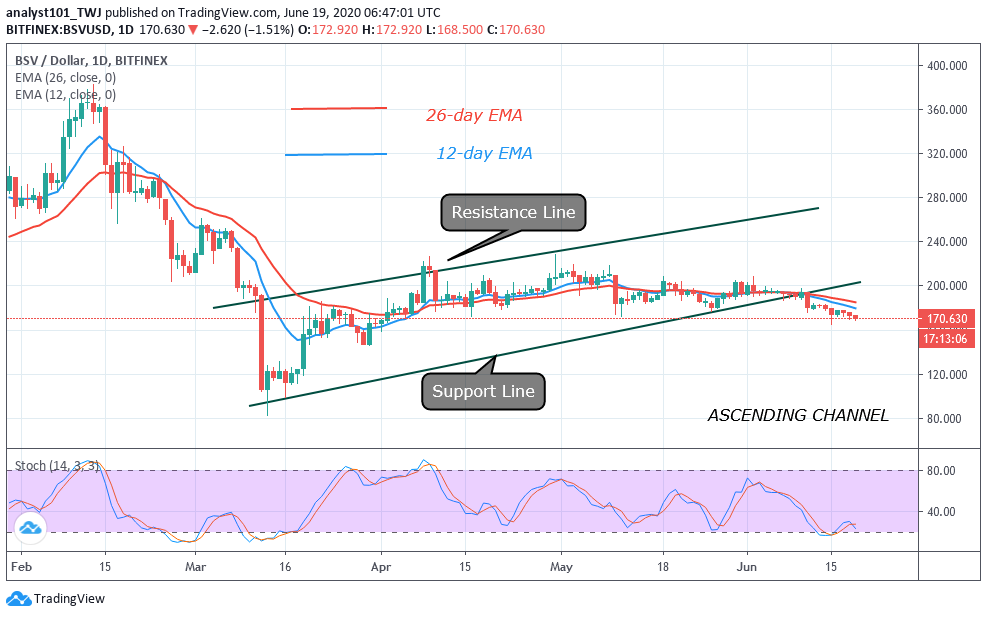 Bitcoin SV is in a bear market. The crypto attained its peak price of $225 in April. Subsequently, BCH has been on a downward move. Today, the coin is trading below $175 after a breakdown from $205 resistance. Buyers made three unsuccessful attempts to break above the $205 resistance.

Eventually, BSV has a breakdown after three weeks of trading below the resistance. The downtrend extended to the low of $170, but the price corrected upward above $175 high. Nonetheless, the selling pressure has reached a low of $172 at the time of writing. The crypto is above 25% range of the daily stochastic. It indicates that the market is in a bullish momentum. 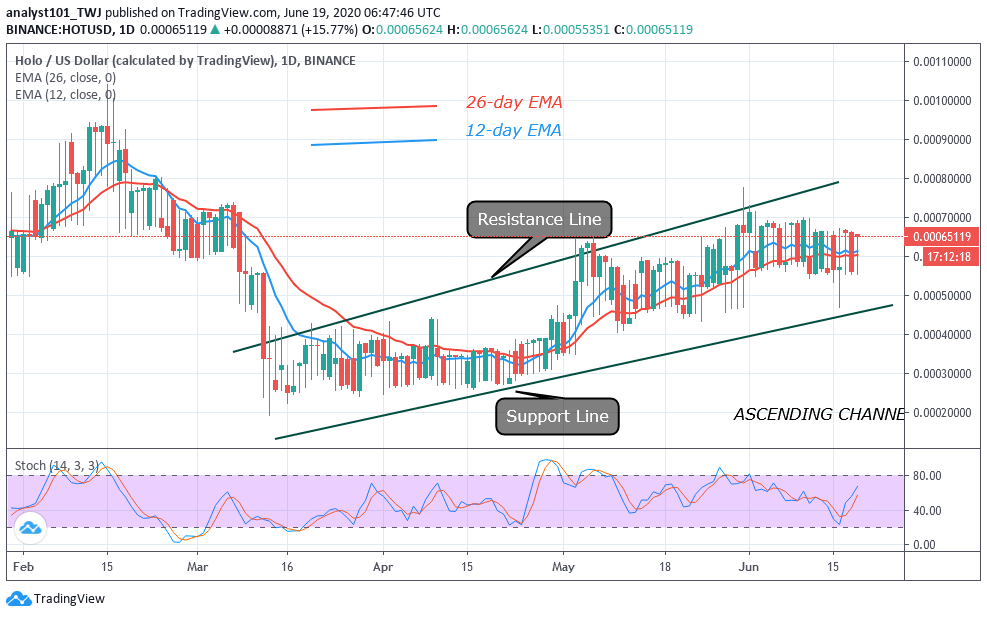 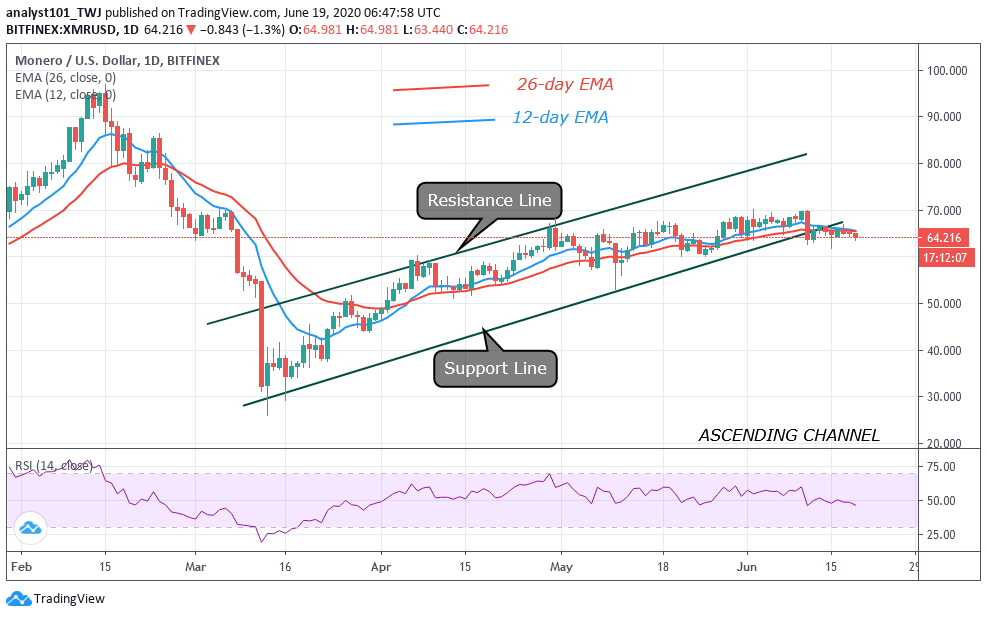 Monero is in a bear market as sellers break the support line of the ascending channel. Previously, the crypto was in an uptrend as it reached a peak price of $70. Buyers attempted to break above the recent high but ended up forming up a bearish double top. This bearish double top pattern is a bearish signal that is responsible for the downward movement of the coin. On the downside, as the bears break the support line of the ascending channel, there is a tendency of the market dropping to $60 low. Further depreciation will follow if the support at a $60 crashes. Meanwhile, XMR is at level 48 of the Relative Strength Index period 14. It indicates that Monero is in the downtrend zone and may likely fall. 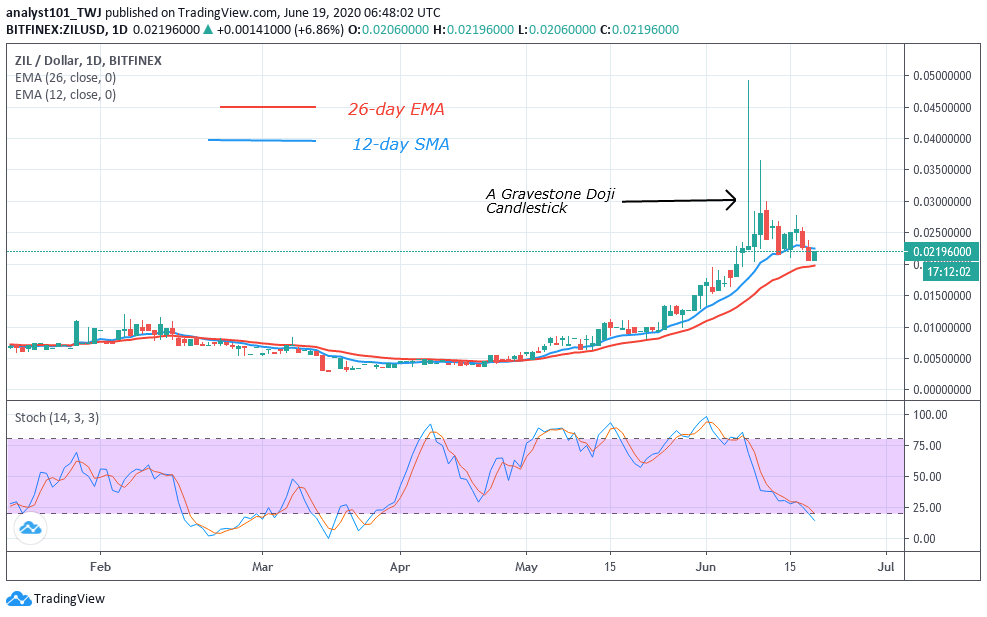 Zilliqa coin is currently on a downward move. From the daily chart, buyers pushed the coin to $0.050 high but failed to sustain the uptrend. Consequently, there is a bearish reaction. There appeared a Gravestone Doji Candlestick with a long upper shadow. It indicates that buyers were able to push the market upward but sellers overwhelmed them. The bears have taken control as the market continues a downward move. ZIL is presently below 25 % range of the daily stochastic. It indicates that the market is approaching the oversold region of the market. The implication is that when the coin is oversold buyers will emerge. 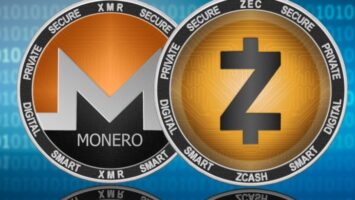 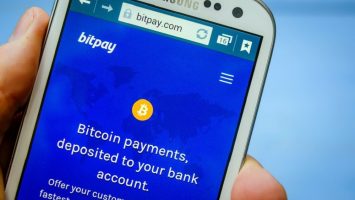