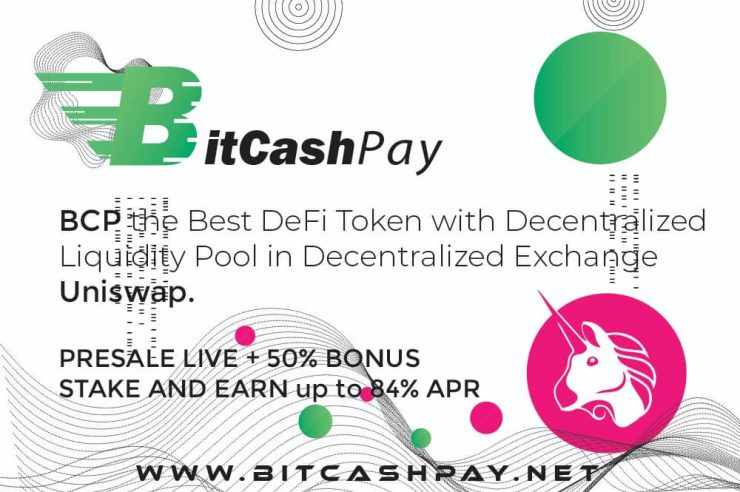 Uniswap has been the go-to for projects aiming at a decentralized exchange wherein middlemen or platform fees are non-existent. Uniswap is a public-friendly exchange where it uses a pricing mechanism called the “Constant Product Market Maker Model.”

Instead of having the buyer and seller agree to a certain price value as a usual CEX does, it automatically computes the “demand vs supply” with a constant equation, therefore changes in value are happening the more trades gather in.

Recently, more and more projects are being listed in UNISWAP for a quick DEX listing and some of these projects have amassed millions of funds in their system. Although this was supposed to be in favor of the general community, there were other projects also which rug pulled just before and/or after listing, adding to the ultimate shitcoin list.

BitCashPay or BCP will have its first listing on UNISWAP in April 2021 after its ICO which will start on Jan. 1, 2021, and end on March 31, 2021. Unlike many other ICOs out there, 95% of its proceeds will be sent permanently to UNISWAP as pair to BCP liquidity and 5% will be for the team expenditures.

The reason for this move is to make sure that the liquidity for BitCashPay will be DECENTRALIZED, OWNERLESS, at least from that perspective. Although there will still be other liquidity providers, proceeds from the ICO will be a huge factor in its success.

There is actually a huge change to our ICO details. The total amount to be sold during the ICO phase is 300M BCP tokens and “set” at a price of 1ETH is to 15,000 BCP. The hard cap will be 20,000 ETH. Unlike during pre-sale, ICO purchasers will not get their BCP tokens immediately after they purchase them with their ETH. Instead, they will be “entitled” to a 15,000 BCP per 1 ETH accordingly BUT, if the hardcap is breached and more buyers will come in, they will have to share in the pool of 300M BCP tokens. If the pool of ETH during ICO doubled, that is at 40k ETH, each 1 ETH purchaser of BCP will now get less, that is 7,500 BCP tokens.

Bitcashpay aims to ensure that users are always in full control of their BCP tokens. Most projects who are planning or have planned to list on UNISWAP have some mechanisms to “foolproof” their project and not be labeled as a rug.

Many investors who are risking their money for the high hopes given by a project and eventually losing them are not practicing a thorough study of each project they plan to invest in. Some rug projects have anonymous teams with a very loud and huge hype in social media leading unobserving investors astray.

Most projects really have no use case at all and are just copycats whether it’s a bitcoin wannabee or DEFI hype jumper. But the thing is, upon their listing in Uniswap, they already have a plan to sabotage the unsuspecting investors which is easy for them to do since they hold the ICO proceeds.

This is where BitCashPay differs. As mentioned earlier, 95% of the proceeds from the ICO will go directly as pair to another 300M BCP in Uniswap, this will be a permanent Liquidity and it will be included in the smart contract. It literally means that 95% of that ETH pool from the ICO and another 300M BCP will not be in any control of any individual or group even of the BCP team.

This will create a MASSIVE pool of Liquidity that will drive the BCP price up, it will create an instant market in Uniswap without any slippage. It will all remain on Uniswap as liquidity to the BCP/ETH pairing. In case the hardcap is reached, there’ll be a total of 19,000 ETH and 300,000,000 BCP tokens in the liquidity pool on UNISWAP that is OWNERLESS! You read it right.

Around $26M of liquidity we will be ownerless, at least at today’s ETH price. That pair is DECENTRALIZED and will never be taken down by anybody, cannot be rugged, and it can’t be pulled out. If the Liquidity can’t be pulled away, BCP creates value.  With BCP’s large liquidity, people can buy in, people can bring on more money into the project that makes the price go up.  Big investors can move in came in and at the same time can cash out. In other projects, they can pull the Liquidity anytime, in BCP we cannot.

So even if all pre-sale buyers, airdroppers, and bounty hunters dump their tokens during our Uniswap listing, it won’t really much have an effect on its price since liquidity is very high. By the way, team tokens are locked until a year after the listing starts. That is, the team can sell their BCP tokens ( if they will) on April 1, 2022.

And this is just the beginning!

For those who would like to be a liquidity provider, we have a special offer for you. Kindly refer to this previous article that we have had for more information. Only 100ETH or 3.1M BCP tokens will be available Contact the team for more information: [email protected]

So, if you are already Staking, referring people, and waiting for the ICO or Uniswap listing, chill and relax for you are already ahead of others. For some lists of upcoming updates, we have 1.) Future partnerships 2.) LP tokens 3.)Code Audit 4.) App release 5.) offline transactions 6. CEX listing.