Cover Protocol is the latest decentralized finance (DeFi) project to be exploited by hackers, as the perpetrators minted infinite amounts of COVER tokens today.

According to data on popular Ethereum on-chain data provider Etherscan, the attackers minted over 40 quintillion COVER tokens. The development came from a mining bug found in the project’s smart contract, which allows the malefactors to produce an infinite amount of COVER tokens.

After successfully conducting one of the largest hacks in the crypto industry, the attackers dumped $5 million worth of COVER tokens in the market, leading to a sharp decrease in the cryptocurrency’s value.

It is not clear whether the perpetrators liquidated more of the illegally mined tokens via other means, but the event prompted the token to crash by over 92%.

According to data on Coingecko, the COVER token was trading at $892 earlier today and is now changing hands at $169.75. 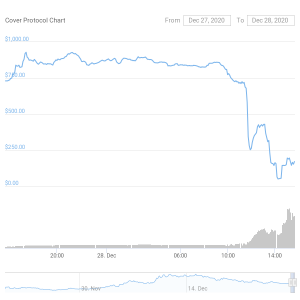 In response to the development, popular cryptocurrency exchange Binance announced that it had suspended COVER deposits and trading on its platform. Binance said the decision was made to protect its users from the COVER’s exploit as the hackers could arbitrage between the price of assets on exchanges.

However, it seems the attackers were only trying to convey a message to the Cover protocol developers to prevent the system’s loopholes.

After the attackers returned the funds, they sent a message to the Cover protocol team, which reads: “Next time, take care of your own shit.”

1. No gains.
2. The Obtained Funds from LP has been returned to COVER.

DeFi protocols, which were considered as better investment alternatives to other crypto-related projects, have left sorrowful tears in the eyes of many. Most of these projects unknowingly left loopholes in their smart contracts that have been exploited by attackers causing users to lose large amounts of funds.

In October, ZenGo wallet researcher Alex Manuskin revealed a method that DeFi protocols can use to exploit unsuspecting victims. The antic caused an investor to lose $140,000 worth of UNI tokens to UniCats.