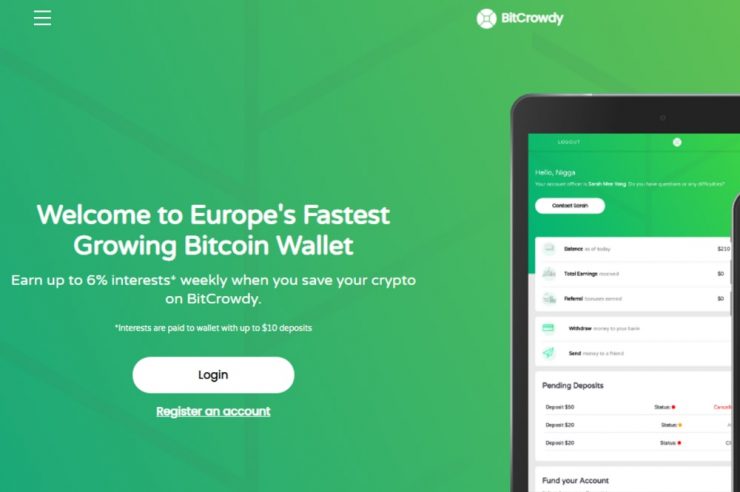 BitCrowdy claims to be Europe’s fastest-growing bitcoin wallet where investors can earn up to 6% weekly for storing their crypto on the platform. In this article, we review the supposed investment platform for anyone asking, “is Bitcrowdy legit?”

Before we dive in, it is worth noting that the rise of cryptocurrencies has led to a proliferation of companies and websites claiming to be legitimate ways for investors to earn money on their holdings. Bitcrowdy is one such platform and our findings suggest that there are many Ponzi-like red-flags that prospective users need to know before putting money into this scheme.

Is BitCrowdy Legit? Here’s What We Found Out

First of all, BitCrowdy brands itself as “Europe’s fastest-growing bitcoin wallet,” and then as Africa’s No 1 Finance App. There are no numbers to back up the platform’s supposed popularity and the domain is less than six months old.

According to the below data from ICAAN, the domain is hosted with NameCheap and was only created in late September 2020.

One of the most visible reasons for possibly calling Bitcrowdy a scam is because the platform falsely claims to be published on popular financial publications such as Yahoo Finance, CNN Money, Forbes, Business Insider, and Wall Street Journal.

BitCrowdy Isn’t Published in Any of These Magazines

Our BitCrowdy review shows that no article about the platform exists on these publications, and claims that the company has raised $1 billion is merely a ploy to make unsuspecting investors trust it.

Bitcrowdy attracts investors by promising a 6% weekly returns on bitcoins deposited on the platform. These would equate to a 24% monthly return and a 288% annual return. These figures are staggering compared with legitimate platforms where people can earn interest on cryptocurrencies.

For instance, BlockFi, Nexo, and Celsius Network payout between 6-9% annual percentage yield on BTC deposits. These platforms also specify their source of profit which generally comes from over-collateralized lending to retail and institutional clients.

For Bitcrowdy, however, the company does not disclose the “mysterious” business from which it pays out the supposed yield. The scheme also claims that the funds are managed by American Bank, Merill Lynch. Well, we couldn’t find any trace of BitCrowdy on the official Lynch Website.

Merrill Lynch Has No Information on BitCrowdy

Instead, participants of the scheme who spoke to Coinfomania on the condition of anonymity disclosed that the platform is closely linked to another ‘bogus’ investment scheme, Agrisunfarms.

Users are mandated to deposit funds for the supposed “poultry farm” via bitcoins that they hold on BitCrowdy because options like credit card and PayPal are inaccessible. This relationship appears to be a deliberate attempt to force people to hold bitcoins on BitCrowdy, thus playing into the hands of the masterminds.

Legitimate bitcoin investment sites offer a large-scale customer support desk to cater to their userbase. Surprisingly, there is no way to reach the team behind this scheme. A “Contact Us” button on the website points to a non-existent Facebook Messenger account.

Going by the red-flags identified so far, our best guess is that BitCrowdy is not legit. It is another ploy to separate unsuspecting investors from their hard-earned bitcoins.

The platform will likely go offline once the masterminds believe they have enough BTC deposits to cover the cost of setting up and marketing the platform to date. Anyone considering putting money into the platform is doing so at their own risk, as we’d never recommend doing so.