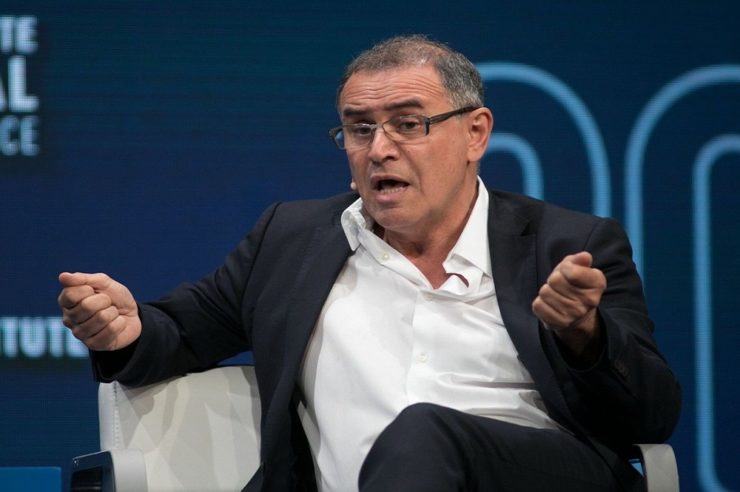 Apparently, the world is not ready for the recording of the Roubini-Hayes debate yet. Or, in the words of the American Economist, not ready yet for the “tape” of the awaited confrontation.

The debate nicknamed “Tangle in Taipei” took place at the Asia Blockchain Summit in Taiwan on Wednesday.

Who are these two personalities and why do they matter in the crypto space?

Nouriel Roubini is an economics professor at New York University’s Stern School of Business largely known for his prediction of the 2008 financial crisis. In particular, he predicted the housing bubble crash of 2007-2008.

He warned about the crisis in an IMF position paper in 2006. Roubini’s predictions have earned him the nicknames “Dr. Doom” (Dr. Doom is a fictional supervillain appearing in American comic books published by Marvel Comics) and “Permabear” (pretty much always negative and critical) in the media.

His economics background relates to the New Keynesian school, advocating that prices and wages are “sticky,” which means they adjust more slowly to short-term economic fluctuations. That’s a modern macroeconomic school of thought that evolved from classical Keynesian economics that urges and justifies a government’s intervention in the economy through public policies that aim to achieve full employment and price stability.

If this isn’t enough to understand why Roubini is so opposed to a cryptocurrency market, the blockchain industry and Bitcoin especially, then I don’t know what is. Being cryptocurrencies from a Libertarian background for which governments should have little to no role in determining people’s and therefore society’s economics, we can see where this is going. Libertarians are in favor of lowering and eliminating taxes, slashing bureaucratic regulation of business, and charitable — rather than government — welfare.

His opposition has gone so far as calling Bitcoin and the whole industry a total scam and the worst of bubbles. To the extent of naming Arthur Hayes of Bitmex a drug-pusher businessman in a tweet yesterday.

Arthur Hayes is BitMex Co-Founder and CEO Experienced equity derivatives trader and banker and his business was accused by Roubini of being “shady” and relying on the exploitation of unsophisticated investors.

There seems to be a lot of mystery on the outcome of the apparently fierce debate. After the session was concluded, Roubini tweeted that he “destroyed” Hayes in the confrontation. He further demanded the “tape” from the event to be released.

Another @CryptoHayes scam: he didnt allow the blockchain conference to record our debate or beam it live. He controls the only recording of it and will only release heavily edited “highlights”. I destroyed @CryptoHayes in the debate and he is hiding. RELEASE THE TAPE YOU COWARD! https://t.co/khNEDM60uN

According to Bloomberg, Hayes is indeed the only owner of rights for the recording and will release highlights of the debate at a later stage. Witnesses claim the pair disputed on decentralization and the importance of cryptocurrencies in a future economic system with Roubini clearly denying any significant role to them.

In this scenario, we announced yesterday the decision of the FCA to look into a possible banning of cryptocurrencies derivatives in the UK. The news was warmly welcomed by the American economist who said he will be pushing for this to happen.

One of the main reasons why he dislikes Bitcoin so much is its strong volatility and continuous apparent dropping in price. The economist only tweets about Bitcoin when it loses value and completely ignores its uptrends. He predicts that Bitcoin will go down to zero in due time.

Meanwhile, we record a further push to the upside for Bitcoin, currently approaching $12,000. Again.