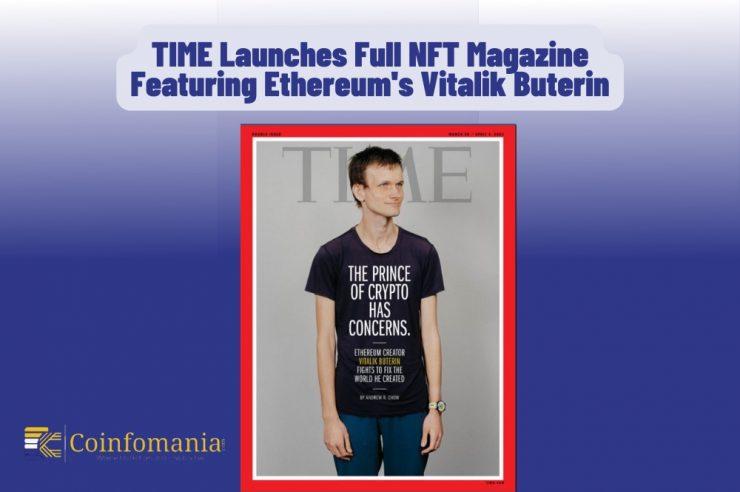 As stated in the report, the upcoming NFT magazine will feature a cover story on Ethereum’s Vitalik Buterin titled “The Prince of Crypto has Concerns.”

TIME said it will release the magazine on the blockchain on Wednesday, March 23, 2022. The NFT magazine will be anchored through a decentralized protocol giving holders the opportunity to read through the entire piece via an interactive NFT.

“As TIME continues to push the boundaries as to what is possible within the web3 ecosystem, producing the first-ever full magazine on the blockchain seemed like a natural extension for our brand and we knew this issue, in particular, would be cherished by our community,” TIME’s president Keith A. Grossman said.

The NFT magazine project came one year after the company’s Web3 debut in March 2021. So far, TIME has built a healthy community of more than 25,000 individuals ranging from artists, collectors and enthusiasts.

The company has also generated over $10 million in revenue since its Web3 debut, with over 5000 customers holding TIMEpieces with their wallets connected to the platform for easy access.

The NFT magazine was created in partnership with LITDAO, a web3 cultural currency and NFT project creator which successfully built the first  fully decentralized book at the beginning of the year.

The media company also joined forces with Circle, a global payment processing company and stablecoin issuer, to airdrop the NFTs on selected wallets from TIMEpiece and Genesis LIT community holders.

Circle also serves as the presenting partner for the NFT magazine project, while Transient Labs, an NFT platform, acts as the project’s technical partners.

Back in April 2021, Coinfomania reported that the New York-based media company partnered with crypto exchange CryptoCom to enable it to accept crypto payments from readers.