Crypto exchange, CrossTower was the first exchange to delist the third-largest cryptocurrency by market cap following the news.

The exchange noted that cryptos are listed on its platform based on multiple dimensions, especially whether the asset is a security or commodity.

While XRP users were still trying to recover from the shock, Beaxy exchange followed suit. The Chicago-based exchange only halted trading for the cryptocurrency, as users are allowed to make withdrawals of XRP.

Beaxy stated that its decision to halt XRP trading on its platform would continue until a court decides if the asset is not a security.

When XRP enthusiasts thought they had seen the worst of it, Hong Kong-based crypto exchange OSL announced today the suspension of XRP trading and payment until further notice due to an SEC lawsuit against Ripple.

Although one might argue that these exchanges do not contribute significantly to the globally traded XRP volume, their actions perhaps provided a glimpse of what is to come.

Many industry experts are touting the possibility that more exchanges will halt XRP trading in the coming days.  Worth noting is that if the SEC wins the lawsuit against Ripple, exchanges that fail to delist the cryptocurrency could face the penalty for offering them on their platforms.

I just read the 71 page SEC complaint vs. Ripple.

I think any crypto exchange who doesn’t delist XRP this week is out of their mind.

If the SEC says it’s a security you’d be crazy to list it without a license.

XRP Plunges By More Than 42%

Since news about a potential lawsuit against Ripple surfaced, the XRP coin has depreciated by more than 42%. The coin, which reached a high of $0.57 on Monday, has plummeted to $0.31 as of press time. 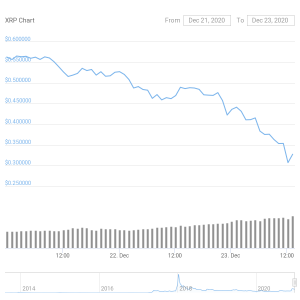 News about a potential charge against Ripple first broke out on Monday evening, when Ripple CEO Brad Garllinghouse revealed that the SEC is planning to sue the firm over the alleged sale of unlicensed securities.

The SEC made it official by filing charges against Ripple and two of its executives, Garlinghouse, and Christian Larsen, its co-founder.

For its part, Ripple has declared that it is prepared to fight the case on all fronts because it believes the SEC labeling its native cryptocurrency a ‘security’ is wrong.