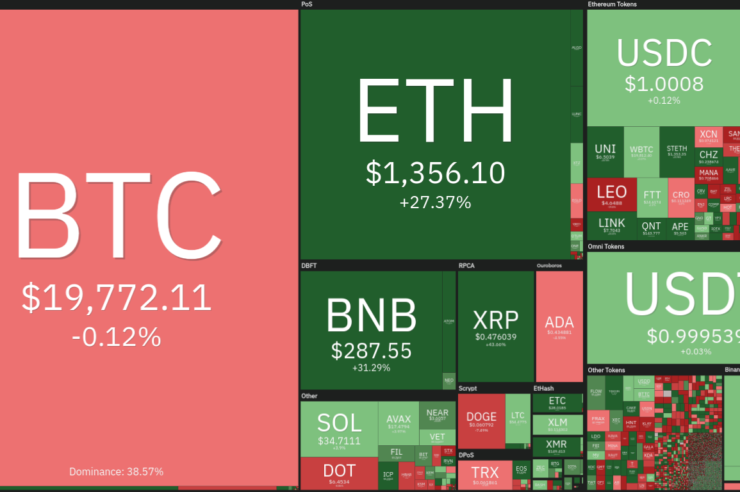 The global cryptocurrency cap saw very little changes during the third quarter. Nonetheless, we observed a more than 4% increase. It opened the three-month period at $900 billion. The sector saw a lot of upward push as most cryptocurrencies saw notable gains. 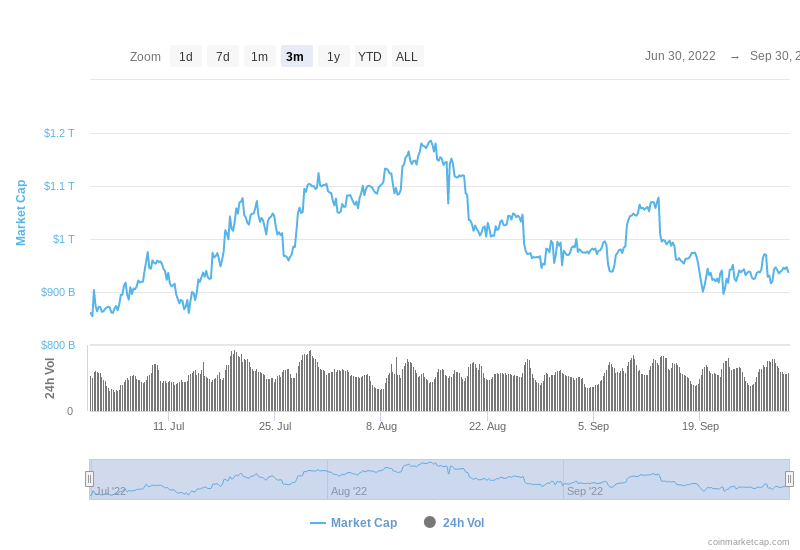 As a result, it peaked at $1.18 trillion. Nonetheless, before the peak, it saw a low of $860 billion. The current valuation of the industry under consideration at this time is $943B. The most recent valuation is a result of low trading volume since September 23. 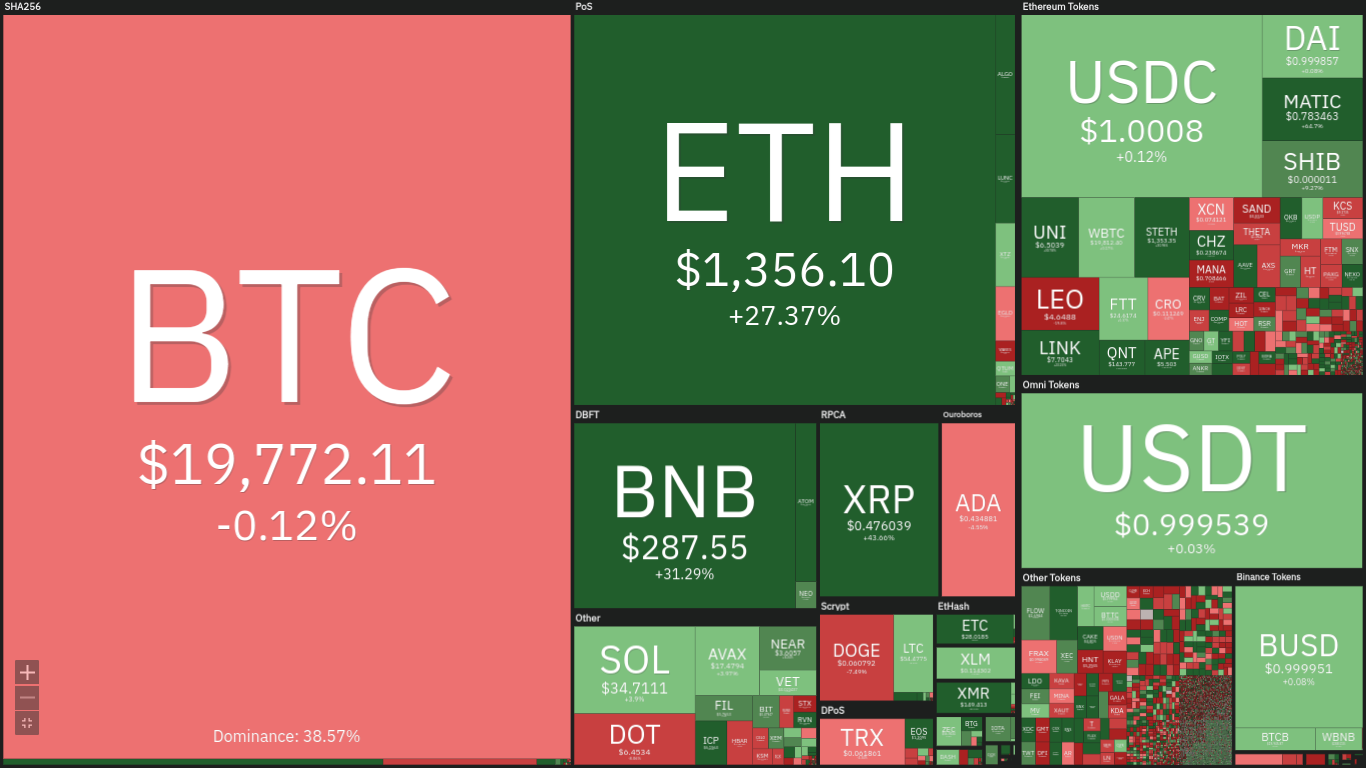 A look at the image above sheds more light on what is going on. We observed stiff movement in the 24 hour trading volume. Nonetheless, it is safe to conclude that the traders went into the third quarter with a lot of uncertainty.

One reason for this conclusion is price actions during the previous three-month period. The sector lost more than 50% as it dropped from $2 trillion to a close at $955 billion.

One dominant feature of that period was the consistent massive drops in price. However, the last 120 days came with a different vibe. The first half was filled with notable uptrends while the second half saw more downtrends and price stability.

The third quarter offered relief from the previous as more cryptocurrencies may close with gains. The image above shows an array of a different assets in greens and reds. One of these coins that piqued attention is Ripple.

XRP Closes the Third Quarter as the Top Gainer

Ripple may end the third quarter as the best-performing coin in the top 10. It is currently up by more than 45%. It picked momentum during the last month of the period under consideration.

Nonetheless, we observed notable change in price during July. Although it started slow, traders rallied the cryptocurrency during the second and third weeks. During the second, it closed with gains exceeding 5%.

It enjoyed a spillover of the bullish sentiment into the third which led it to end the week with a positive price change of 4%. The last seven-day period saw it gain more than 5%.

On the monthly scale, XRP surged by more than 14% in July. Unfortunately, it lost almost all of its accumulated gains the next month. One of the highlights during the 30-day timeframe was the third, and fourth week.

During the third seven-day period, the bears seized control of the market and sent the altcoin plummeting. As a result. It lost more than 8%. The next intraweek session saw a repeat the previous and the coin lost 7%.

On the monthly scale, XRP closed with a deficit of more than 13%., almost erasing the previous gains. It is safe to conclude that the cryptocurrency under consideration sees very little movement during the first week of the month.

The same thing happened during September. Ripple failed to record any considerable increases during the first intraweek session. It did during the second with a more than 7% surge. The fourth week accounts for most of the gains in the third quarter.

It ended that period with gains of up to 37% after peaking at $0.55. On the weekly chart, we observed several changes in indicators. One such is the Relative Strength Index. The metric is above 50 for the first time since March.

Binance Coin Ends the Third Quarter With a 30% Increase

Binance coin had one of the biggest starts to the third quarter. Following three months of consistent drop, it found support at $213 and was mostly bullish afterward. The gains were evenly spread across the 30-day period.

One indication of this is that all through the period under consideration, BNB on average recorded gains of more than 5%. For example, during the first week, it surged by more than 7%. The second week came with less input.

Following a plot by the bears to erase the accumulated gains, the bulls rallied the coin to a close at $24 which indicated a more than 5% increase from its opening price. A new peak during the third seven-day period.

On the monthly scale, BNB ended that 30-day session with gains exceeding 29%. August came with more in terms of a hike but the coin lost momentum as it progressed. One look at the monthly candles shows a long wick.

During the first week, it peaked at $336 but met rejection. The bearish sentiment continued into the second week. It saw a deeper low but rebounded and closed with losses of over 5%.

The downtrend continued into the next seven-day session. As a result, the exchange token lost 8.36% during that time. On the monthly chart, it failed to record any notable price increases or losses.

September came with a different vibe as we observed that both the bears and bulls had a field day. There was a massive high and a low as well. In the end, the coin failed to record any notable gains.

Of the three months in the third quarter, July was the most profitable. The coin enjoyed such a massive surge that it hasn’t since 2021. A closer look at the asset’s performance during that timeframe revealed that it was mostly bullish.

A clear indication of this is the weekly performance. During the first intraweek session, Polygon recorded gains of more than 23%. The uptrend continued into the next few days as we observed another massive increase.

Nonetheless, we saw the bears try to halt the surge but failed. In the end, the asset ended that session with gains exceeding 30%. More increases the next another during the fourth guaranteed a close on the monthly with more than 90%.

Unfortunately, the downtrend was in full gear as the quarter advanced. August was the most bearish, as the coin ended the month with losses exceeding 10%. One of the highlights of that period was a massive 18% drop in one week.

The bulls tried to stage a buyback but failed. The bearish sentiment extended into the most recent month as MATIC is down by more than 6%. On the quarterly scale, it ended with gains of more than 60%.

Nonetheless, several changes took place with regard to indicators. In the weekly chart, we see the 12-day EMA maintaining its trajectory throughout the period under consideration. However, a look at RSI tells a different story.

We noticed a slight downtrend in the metric which may play against the coin soon. Nonetheless, we saw more attempts at flipping the first pivot support after losing it. Polygon also established a new long-term support at $0.72. Although it flipped it on different occasions, we saw more rebounds there.

Ethereum Merge did Little to ETC

Considering the massive hype around the ethereum merge, many would say one of the direct beneficiaries is Ethereum Classic. Unfortunately, this was not the case as we observed that there was no notable in price following the merge.

The fundamentals did not shield the asset from the massive retracement that followed. The token may likely end September with another more than 10% decrease. One of the highlights of the month was when it dipped by more than 20% during the second week.

A similar thing happened in August when it closed the third week with a deficit that exceeded 18%. It failed to recover as the 30-day session progressed and closed the eighth month of the year with losses of more than 11%.

July was the best 30-day period for ETC. The last time ETC saw this amount of pump was in April 2021. Nonetheless, a breakdown of price actions during that session will shed more light on what transpired.

The token failed to record any notable price changes during the first intraweek session. This changed during the next session as it picked up momentum. It gained more than 20% in the second week as the bulls rallied.

The third week marks the continuation of the uptrend. We noticed another massive surge that saw ETC end the intraweek session with gains of more than 30%. It hit the pick for the third quarter the next week.

It spiked to a high of $45 but met strong resistance and was sent down. As a result of the dip, it closed at $36 after opening at $25. Both the opening and closing prices denote a 42% price change.

On the monthly chart, it closed with a price change exceeding 140%. During the retracements, the token maintained the $23 support which is one of the toughest that traders may watch out for in the long term.