The once dwindling market as of last week is on a reversal pattern. As of the time of writing, the derivative market trading increased by 22%; bringing its total volume to a little over $152 billion.

The increase in trading volume is associated with the influx of traders. The market started seeing this influx following Bitcoin first attempt at $50,000 on Saturday. It was noted that at the time, that as BTC slowly climbed traders trading futures slightly became bearish. The actions of these traders gradually mounted pressure on the largest crypto; slowing it down. Bitcoin came to a complete stop as the pressure intensified. As of that time, the total number of open short orders was 53% as opposed to 47% according to bybt. The total trading volume was at $135 billion. Is the situation any better now?

As before, the derivative market is modestly bearish with the bull owning up to 48% of the currently open orders. The bears have been trying to flip this number as the short orders increased to 54% sometime in the last 24 hours.

The resilient buyers are hoping to rally the market and take over. If this happens we could expect better prices across the spot market as this will be the boost it needs.

The past 24 hours have dealt more blows to the bulls than anticipated. Although, the total money liquidated amounts to $452 million. Unfortunately, the liquidation was almost one-sided as more than $350 million of the REKT funds are from long positions. 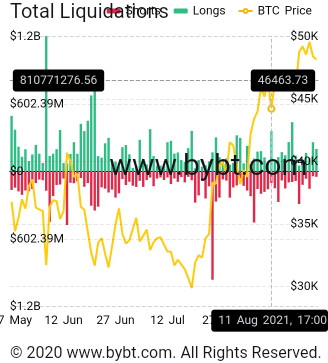 The highest liquidation happened on Bybit as a trader lost $4.56 million. The exchange also records 40% of the total REKT capital as traders lost $182 million of the platform. As the derivative market continues to soar, more traders are expected to into it. The past three days have seen the number of traders doubled.