Blockchain-based transactions are notable for their irreversible nature. While this feature can be advantageous in most cases, it can turn out to be a problem, as a recent development shows that $350,000 (approximately 216 ETH) has been expended in transaction fees, and the transaction eventually failed.

Blockchain explorer Etherscan revealed that the address that paid the large transaction fee is linked to the recent Nomad bridge hack that wiped about $200 million from the protocol.

According to the image shown above, the sender sent a very small fraction of Ether to the receiving address on Monday, where the transaction ultimately failed.

Can It Be Recovered?

While it is true that blockchain transactions are irreversible, it is also noteworthy that fees are sent to block miners as rewards. So, if any plan to retrieve the $350k fund is to be carried out, the miner of the transaction will have to be contacted via Etherscan, where in this case, the fee was rewarded to block 15259103.

Interestingly, Coinfomania reported in September 2021 that a transaction where $23.5 million, which was expended as a transaction fee, got refunded to the sender after the miner was contacted.

Nomad bridge, a decentralized finance (DeFi) protocol that facilitates sending and receiving of crypto assets across various networks, got hacked in the late hours of Monday.

The exploit that wiped almost $200 million from the protocol represented nearly all of the protocol’s assets-under-management (AUM). While the funds are yet to be retrieved by the company, the team noted that investigations are underway to get the stolen funds back. 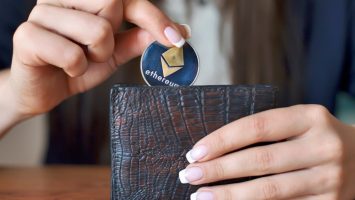