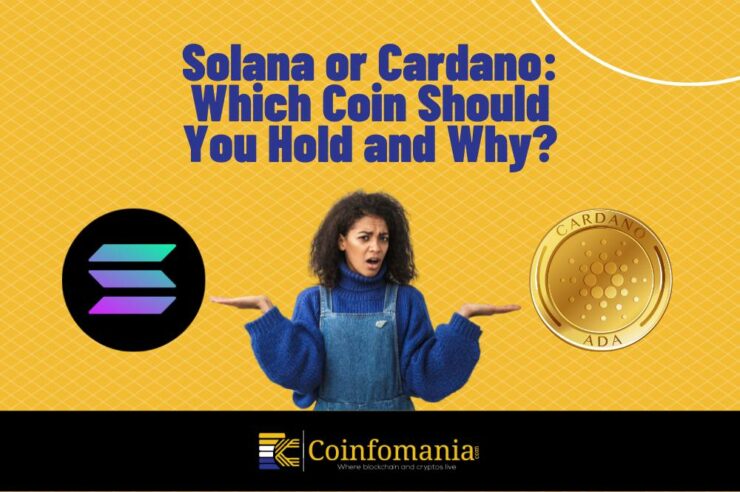 Many investors, especially beginners, have been wondering if they should invest and hold Solana or Cardano, considering the two projects have been making waves in the crypto industry in recent months.

While this can be quite a difficult decision to make, a closer look at these two blockchain projects will help you decide which one to invest in.

This head-to-head comparison between both projects will give a detailed overview of both Solana and Cardano, including their total supply, market cap, and pros and cons.

Solana (SOL) is currently one of the hottest and most talked about blockchains in 2021 because of its remarkable transaction speed and extremely cheap transaction costs.

Solana is a high-performance, decentralized blockchain network designed to tackle one of the biggest challenges that existing blockchains have – scalability.

It is also one of the blockchains with the “Ethereum Killer” tag, as it is giving Ethereum and several other existing blockchains a run for their money with its capabilities.

Solana can support a large number of decentralized applications (dApps) without sacrificing speed and at extremely low fees, a feat that Ethereum has been struggling to achieve in recent times.

Built with speed and scalability in mind, Solana has a throughput of a whopping 50,000 transactions per second, with sub-second transaction confirmation time, and its fees can cost as little as $0.001.

Solana was founded earlier in 2017 by Anatoly Yakovenko, the former senior software engineer at the American multinational company, Qualcomm.

Yakovenko served as a software engineer in both Qualcomm and the American file hosting cloud storage service, Dropbox. Shortly after leaving both firms, with a lot of experience in compression algorithms, Yakovenko set out to develop Solana.

He initially published the Solana whitepaper in November 2017, detailing his intention to use the proof-of-history (PoH) consensus algorithm, a technique that was used to efficiently keep time between computers that do not trust each other.

Along with some of his former colleagues at Qualcomm, including Greg Fitzgerald, Yakovenko rolled out Solana in 2017 during the peak of the ICO boom, raising about $25 million from investors.

A series of research and innovations were subsequently commenced with the aim of developing Solana into a blockchain network that solves some of the major problems of its existing competitors.

In 2018, Fitzgerald coded the blockchain network in Rust, a programming language that highlights performance and reliability over ease of use.

By February 2018, Solana’s official whitepaper was released, along with its internal testnet. The network went through a couple of testnet phases before the launch of its mainnet beta in March 2020.

Solana uses a unique combination of proof-of-history (PoH) and proof-of-stake (PoS) and several other innovative technologies to maintain its speed and scalability rather than relying on sharding or other types of layer 2 solutions.

The PoS system monitors the PoH processes, validating each sequence of blocks on the network.

Solana has put in place about 8 innovative technologies to help it achieve its goals of becoming a go-to blockchain for developers and traders. Below are just some of them:

Solana brought the PoH system to make blockchain more decentralized. This system embeds historical records of blockchain transactions that have happened already before they are included in the distributed ledger.

It does this accurate record-keeping due to a mechanism called the “Verifiable Delay Function”. The problem is that the nodes in other blockchain networks cannot be trusted with an external source of time or any timestamp that appears in a message.

To solve this problem, PoH embeds each transaction with a timestamp that helps to specify the sequence of events that were processed before the latest state of the blockchain is broadcasted to the whole network.

The PoH system creates a historical record that proves that an event has occurred at a specific moment in time.

However, while PBFT assists in reaching consensus, TowerBFT uses PoH as its cryptographic clock to reach blockchain consensus as quickly as possible, without incurring massive messaging overhead and transaction latency.

Solana uses its Gulf Stream protocol, which promotes the catching and forwarding of transactions even before the next set of blocks for confirmation are completed, to reduce confirmation times.

Solana utilizes this transaction processing engine to allow thousands of smart contracts to run in parallel with each other to achieve a more efficient runtime for the network.

SOL is the native cryptocurrency on the Solana blockchain with a total supply cap of 489 million tokens.

Currently, there is a circulating supply of 297 million SOL in the market. With a market cap of $43.3 billion and a price of $145, SOL is the 7th-largest cryptocurrency in the world.

Its spectacular performance in recent months has attracted thousands of traders, investors, and developers to the network. Holders can stake their SOL to earn profit.

Cardano (ADA) is a proof-of-stake (PoS) blockchain network launched in 2017 by Charles Hoskinson which was designed to be an efficient alternative to the existing smart contract and proof-of-work (PoW) network, Ethereum.

Cardano is a decentralized blockchain platform with a focus on improving scalability, interoperability, and sustainability, some of the main features which are highly lacking on proof-of-work (PoW) networks.

The project is often called the “Ethereum Killer” because it solves some of Ethereum’s biggest weaknesses.

However, after noticing some of the major setbacks in the Ethereum network and a few disagreements with other co-founders, Hoskinson set out to rectify some of Ethereum’s mistakes.

He began developing the Cardano network in 2015 and by 2017, the platform was officially launched and it was named after the famous Italian mathematician, Gerolamo Cardano.

To ensure transparency and decentralization, Cardano splits the management of its protocol and other network responsibilities among three major organizations.

Launched in 2015, Input Output Hong Kong (IOHK) is a software company responsible for building the Cardano network and is currently focused on creating technological solutions that promote financial inclusion for the unbanked.

This is a non-profit organization that supervises and promotes Cardano’s visibility on the global stage. Based in Zug, Switzerland, The Cardano Foundation handles the network’s policy issues and develops use-case opportunities for the network.

This is IOHK’s sister company of sorts. It provides support to Cardano developers and encourages the commercial adoption of the network via integration with different businesses.

Cardano has also set a detailed roadmap of its development into becoming a choice platform for the development of dApps. Cardano’s roadmap includes:

This stage began in September 2017 and is the foundation of the network. The focus was on getting Cardano’s native cryptocurrency into the market and building a community of loyal Cardano enthusiasts.

The Shelly era went live in July 2020, introducing proof-of-stake to the platform and offering staking rewards to users.

It is the latest to launch. It went live in September 2021, allowing the network to support smart contracts and the development of dApps.

This era is expected to help Cardano achieve sustainable scalability and interoperability by introducing side chains.

This is the final stage of Cardano’s roadmap and it is expected to make the network a self-sustaining platform.

Cardano uses the Ouroboros PoS algorithm to secure its network and validate transactions. It is designed to be modular and future-proof.

Ouroboros divides time into epochs which are also subdivided into slots. These slots, which are short periods of about 20 seconds, will have exactly one block being created within them.

There are about 432,000 slots in one epoch and the cycle of block creation in Cardano lasts for five days only.

The CSL is where all peer-to-peer transactions on the Cardano network take place.

The CCL maintains Cardano’s security and is a framework for the implementation of smart contract functionality on the network.

ADA is the native cryptocurrency on the Cardano platform, named after the world’s first computer programmer, Ada Lovelace.

The coin has a total supply cap of 45 billion ADA, with over 32 billion ADA currently in circulation. It has a market cap of $71 billion and is the third-largest cryptocurrency in the market.

ADA can be transferred to anyone in any part of the world at sub-second confirmation times. It can also be staked in different staking pools.

Solana or Cardano: Pros and Cons

Which Coin Should I Hold, Solana or Cardano?

In recent months, the prices of both SOL and ADA have been skyrocketing, prompting investors and traders to contemplate which coin to hold.

If you’re buying Solana or Cardano simply because you are expecting another massive jump within the coming weeks, you might want to think again.

True, every investor wants to make profits for their investments. However, buying a cryptocurrency just because its price is skyrocketing, and hoping to make a quick buck will ultimately result in bad investment choices.

The prices of SOL and ADA are different because of the differences in their total supply and market capitalization.

While ADA has a whopping 45 billion supply cap, SOL has a total of 489 million. Therefore, since the supply of SOL is relatively less than that of ADA, its price is also higher.

Additionally, ADA’s market cap is much higher than SOL’s. Sitting at $77 billion, it is almost twice the market cap of SOL, which is currently $43.4 billion.

Since both coins have proven to be very valuable and considering their incredible performance in the past few months, it will be best to hold both.

Solana is relatively more scarce than Cardano and traders can leverage this scarcity to make profits from the coin’s volatility. Cardano, on the other hand, has a clear roadmap for the future and is suitable for long-term investments.

Both Solana and Cardano are very innovative projects with a bright future. They both bring a lot of features to the table, which are all geared toward solving the scalability issues in the crypto industry.

There is still a lot of room for growth as the cryptoverse continues to grow. While both projects are vying for Ethereum’s throne, there is no guarantee that new projects with a lot of potential will spring up.

In the meantime, both blockchain projects are doing great stuff and investors who can afford it might want to consider holding the two coins. However, small investors who can only afford to just invest in Solana or Cardano can pick any of the two.