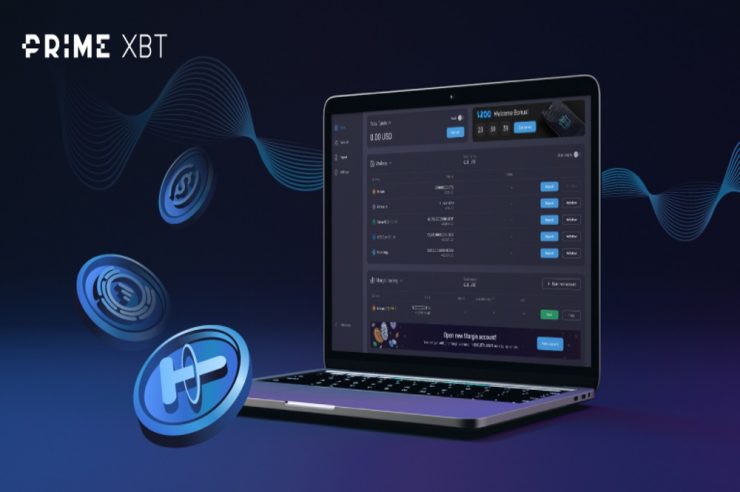 Amongst the top 20 coins that fell prey to the massacre in the crypto bloodletting last week, one coin managed to survive relatively unscathed – Solana (SOL), the native cryptocurrency of the Solana blockchain.

For the record, SOL still managed to carve out a gain of around 60% for the week, a very impressive record when most of the other coins were registering losses of between 20% to 50%. In fact, SOL also managed to log a record daily percentage gain on Sunday’s sell-off that had Bitcoin (BTC) losing 6%. This comes on the back of a very strong uptrend that is sending the cryptocurrency to new ATHs consistently.

For the uninitiated, SOL is another blockchain capable of smart contracts and has been viewed as a worthy challenger to Ethereum (ETH). It utilizes a proof-of-history consensus combined with the underlying proof-of-stake consensus.

Solana grants reward incentives to SOL token holders who stake their tokens to help secure the network. Another incentive for SOL validators is an inflation-adjustment mechanism that went live in February. SOL has an initial annualized inflation rate of 8%, where newly minted tokens go to validators and stakers in proportion to their staked amounts. The inflation rate is designed to decrease by 15% each year until it reaches 1.5%.

Hence, SOL already provides the deflationary token economics that ETH will only achieve after implementation of its token-burn upgrade in July, which makes SOL immediately attractive to investors who are keen in staking for yields in a deflationary asset.

Another point that makes Solana a worthy contender for Ethereum is its higher throughput. While Ethereum is currently able to handle about 18 transactions per second (TPS), Solana claims to be able to handle 65,500 transactions per second (TPS). As such, SOL has been one of the key blockchains that has been able to capitalize on ETH’s network congestion issue due to its much lower throughput, which in turn causes transaction fees to be very high on the ETH blockchain as users try to outbid one another in order to get their transactions processed sooner.

SOL’s ability to handle a larger load has also made the platform a cross-chain destination for projects such as Civic and the popular stablecoins USD Coin (USDC) and Tether (USDT). USDT is one of the earliest adopters of SOL and this has given it much affirmation.

As the problems surrounding Ethereum remain, many platforms have been building on other blockchains – Binance Smart Chain  (BSC) and Solana have been the biggest beneficiaries so far. While BSC has been in the limelight more due to high profile news of PancakeSwap beating Uniswap, Solana isn’t very far behind either. DeFi platforms such as Raydium and Serum have launched on the Solana blockchain, and there is a growing list of projects in the process of transitioning to the network.

Solana received another boost in early April when its native Sollet wallet released its Chrome extension. The extension offers Solana ecosystem functionality that mirrors the way MetaMask works for Ethereum, which makes interacting with the blockchain a lot more convenient.

The number of cryptocurrency wallets supporting SOL is also growing at a commendable rate, a sign that crypto builders, not short-term speculators, are supportive of the project. Prominent wallets like Exodus, Ledger and Blockfolio are already offering support for the token. A recent integration with Phantom wallet has also brought new excitement to the SOL ecosystem as it will enable the creation of non-fungible (NFT) tokens, bringing one of the hottest sectors of the crypto market to the network.

Developer activity is also vigorous on SOL. According to the data, it currently occupies the 4th position behind Chainlink (LINK), Elgorand (EGLD), and Bitcoin (BTC) in the number of developers’ commits on Github, a sign that the project is very much alive and improving. 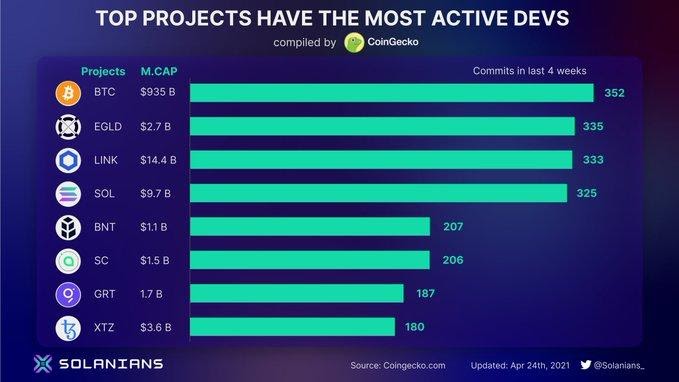 However, despite having strong fundamentals and a ranking of 13 in the crypto top 20, SOL doesn’t have as much publicity and fanfare as compared with other popular tokens, resulting in much less hype. This in turn leads to a much less degenerate trading community compared with other highly leveraged tokens like BTC or XRP, which has worked in SOL’s favor. The token has been climbing steadily this year without getting noticed by speculators and hence, has a far less leveraged investor profile. This becomes especially important when the broad market is experiencing a selloff.

SOL doesn’t experience quite as much liquidation compared to other tokens popular with retail investors. This may explain its resilience during a week of fast price drops and bloodbath seen in other tokens.

For instance, during the $10 billion market-wide liquidation day on 18 April, SOL contracts only accounted for around 2% of the total liquidations in the markets, with only $18 million of its futures contracts liquidated.

Even during Biden’s tax proposal induced selloff between Thursday and Friday, when the market saw liquidations of around $3.7 billion, SOL only saw $34 million in liquidations, which were equally distributed between longs and shorts. This tells a lot about the trader profile of SOL, who are quite balanced and less leveraged than those trading BTC, ETH, XRP and DOGE, which saw massive liquidations.

With solid fundamentals, while not being as hyped up as the other tokens in the market, SOL could be a solid investment for investors who are finding the current market volatility a little too unsettling. For investors that have invested in ETH and which to find an alternative smart-contract blockchain to invest in, SOL may be a good choice.

Kim Chua is an institutional trading specialist with a track record of success that extends across leading banks including Deutsche Bank, China Merchants Bank, and more. Chua later launched a hedge fund that consistently achieved triple-digit returns for seven years. Chua is also an educator at heart who developed her own proprietary trading curriculum to pass her knowledge down to a new generation of analysts. Kim Chua actively follows both traditional and cryptocurrency markets closely and is eager to find future investment and trading opportunities as the two vastly different asset classes begin to converge. 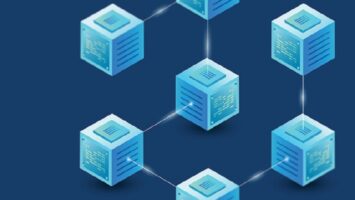