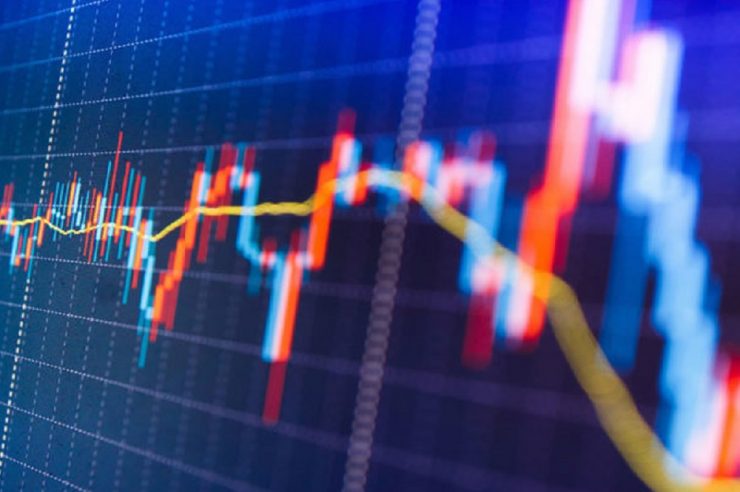 Valued at $1.71 trillion at the start of the week, the crypto market seems to be closing almost the same way it opened. The industry peaked at $1.96 trillion during the timeframe under consideration.

The high served as a morale boost for the bulls as the Fear and Greed Index peaked at 51 at the time. One of the highlights of the week was when the market surged and gained more than 10% within 24 hours.

However, the descent to the current valuation was almost as quick as the hike. On the part of fundamentals, the past six days have seen a mix of both the bullish and the bearish. One of the oldest lingering FUDs resurfaced a few days ago, and as a result, the market lost more than 7%.

Aside from the return of recurring bearish news, Kenneth Griffin, founder of Chicago-based hedge fund Citadel, has openly admitted being wrong about his early perception of the cryptocurrency market.

The image below further expresses the current situation of the market. The top loser during the period under consideration is FTM as it lost almost 20%. While the top gainer is WAVES as it gained 45%. 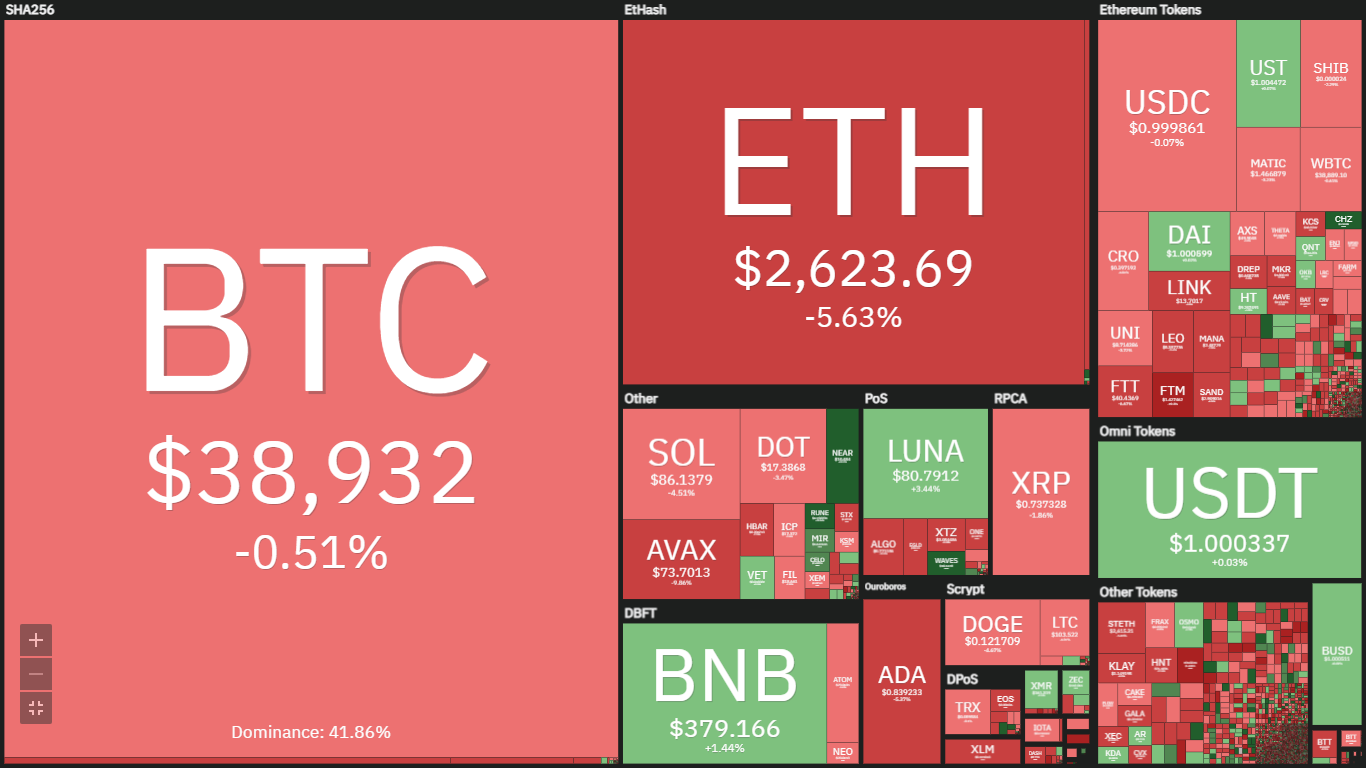 With the a brief overview of the market, let’s examine the performance of some coins in the top 10.

Bitcoin had its best start to the week for the first time since January. The coin surged by more than 14% as it regained composure at $42k. This bullish start continued to the next day as the largest cryptocurrency by market cap flipped the $44k resistance.

Unfortunately, the bulls were unable to sustain the uptrend and BTC resumed its downtrend. Wednesday was marked by minimal trading volume but saw more selling pressure that resulted in its apex coin losing a minute percent.

The retracement continued throughout Thursday, the largest digital asset lost almost 4%. Bitcoin saw its biggest loss on Friday, as it dipped by more than 7% in a quick correction that lasted barely 4 hours.

The weekend went the way it has been with dojis representing both intraday sessions. The asset under consideration may close the week gaining or losing anything significant. During the current intraweek session, the bulls successfully fended off attacks on the $38k support.

Following the short burst to $44k, BTC was seen trading above its DMA. However, the latest correction has the top coin dip below this metric, resulting in more worries for the buyers.

Additionally, the largest digital asset has retraced below its pivot point – an indication that it has returned to its bearish dominance. We also observed that the Moving Average Convergence Divergence (MACD) is also giving off a bearish signal as both lines just intercepted.

Ethereum also saw the same sentiment as BTC. An almost perfect start to the week saw ether gain 11% as it cruised past the $2,800 resistance. The buyers were no doubt thrilled to see such a quick burst and were convinced of a further uptrend.

Tuesday saw more price increases as ETH traded above $3,000 for a few hours before relinquishing the spot. Similar to the preceding cryptocurrency, the largest alt saw minimal trading volume on Wednesday as the bulls failed to sustain the buying pressure.

The downtrend continued until the fifth day of the week that saw ether record the biggest  loss of the intraweek session. It lost more more than 7% during this time as it closed the session trading at $2,630.

Based on the the second largest coin performance over the last seven days, we that the asset hit a high of $3,045 and a low of $2,535. ETH failed to record any significant gains or losses.

Ether has retraced below its pivot point – an indication that it has returned to its bearish dominance. We also observed that the Moving Average Convergence Divergence (MACD) is also giving off a bearish signal as it diverged over the past 24 hours.

Last two weeks, BNB lost 5% of its values. The token was unable to defy general market sentiment. The last seven days saw a change in scenarios as Binance coin like the rest of the market, also enjoyed mixed sentiments.

The price increase was extended to a second day but showed signs of slowing down in the third. Following the doji that represented Wednesday, we observe the start of a downtrend that the fourth largest coin loss 7% over the next 48 hours.

As seen in previous weeks, BNB saw minute trading volume over the last two days of the week. Unfortunately, Binance coin like BTC fell below its pivot point and also the Displaced Moving Average.

Additionally, a bearish divergence is expected on MACD. However, observed how the bulls defended the $370 support as it was tested more than three times during the previous intraweek session.

XRP was about to close the past week, losing more than 4%. However, it saw its biggest pump on Friday as it gained more than 10% during the time. Like the preceding currency, the small hikes experienced over the past 48 hours have resulted in the exchange token surging  above its DMA. It failed to record any significant increase.

The past seven days were an improvement of the highlighted period. Gaining more than 8% on the first intraday session, the stage was for massive rallies. Unfortunately, seeing a doji on the second day of the week, the coin slipped back into bearish dominance.

The last three days saw prices shuffle between $0.71 and $0.76. At the end, the bulls held on to the early lead and saw XRP close the intraweek session with a more than 4% increase.

Opening the last week of February at $49 and is currently worth more than $76 per unit. The distance between the opening price and the most recent value suggests that the token may close the current intraweek session gaining more than 50%. Terra saw its biggest hike on Friday, as it surged by 12%.

One outlook noted that RSI was on the rise – indicating an increase in buying pressure. If the bulls sustain the current market trend, terra may end the week above $90. LUNA saw a high buying pressure that saw it hit a high of $97.

However, the momentum dwindled and the digital asset retraced, closing the week at $79. Regardless of its performance, terra climbed up the market cap rank and is currently the seventh largest coin.

Additionally, LUNA is still perceived as a bullish asset as it gained more than 9% over the last seven days and is trading above its pivot point.

The current eighth largest crypto by market cap was mostly bearish two weeks ago. However, we observed that the token also experienced little moments of bullish action, seeing its biggest hike on Friday as it gained more than 5%.

Kicking off that period at $0.93, the asset under consideration is trading at $0.88 as at the time of writing. This is an indication that ADA may close the intraday session losing more than 4%. At the end, Cardano closed losing 8%.

The weekly chart suggests that the digital asset has been in a downtrend for almost four weeks now. The previous intraweek session was no different as the token failed to record an notable increase.

Like BTC, we also observed that the Moving Average Convergence Divergence (MACD) is giving off a bearish signal as both lines just intercepted. Additionally, ADA is edging closer to it first pivot support.

Like Cardano, Solana has been on a downtrend throughout February. Last two weeks were and extension of these corrections. The asset under consideration has seen a low of $75 and hit a high of $96. It opened at $90 and is currently exchanging at $88.

The closing price suggests that the token may fail to record significant gains or losses. However, it saw its biggest pump on Thursday as it gained more than 5% during the time. Like BTC, the small hikes experienced over the past 48 hours of that intraweek have resulted in the exchange token surging  above its DMA.

SOL was very promising at the start of the previous seven-day period. It flipped the $100 resistance as it hit a high of $107. Unfortunately, solana closed the session with no significant gains.

Like BTC, we also observed that the Moving Average Convergence Divergence (MACD) is giving off a bearish signal as both lines just intercepted. Additionally, the ninth coin by market cap is edging closer to its first pivot support. 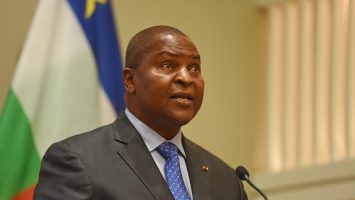