With many cryptocurrencies seeing little more hikes and minimal retracements, the crypto market no doubt saw a lot of improvements from the past week’s performance. The market closed the period at $1.81 trillion but is estimated at $2 trillion as of the time of writing.

The increase over the past seven days marked a good start to the new month. Many will hope for this to be the end of the two-month long downtrend. The crypto industry comes alive with a lot of greens with the top gainer being MINA as it gained more than 30% during this period. 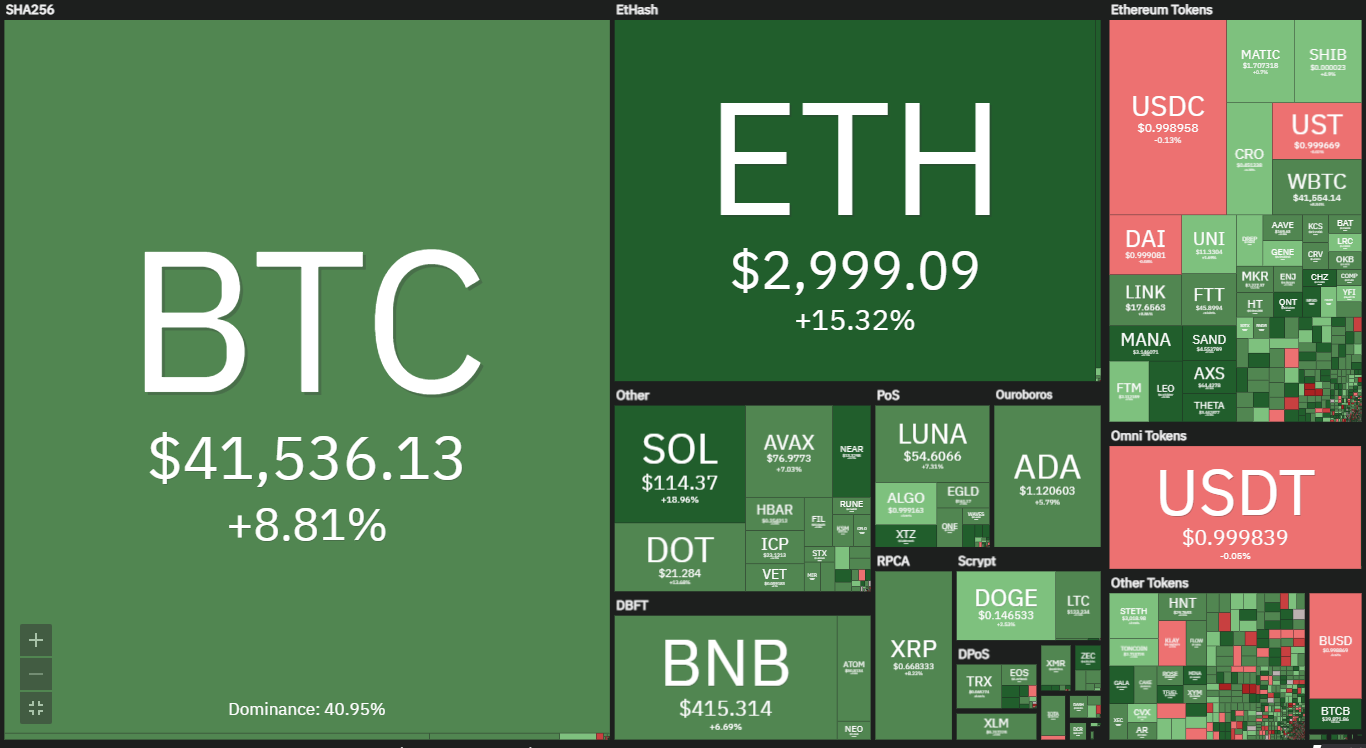 Crypto Street was seen buzzing with a lot of positivity as it was hit by several bullish stories. To the delight of most traders in India, crypto assets are no longer illegal. Crypto traders in the country are now subject to tax obligations. The Indian Government has imposed a 30% tax on income from the transfer of crypto assets and also plans to launch its own digital currency.

More support for Bitcoin as MicroStrategy co-founder and popular Bitcoin proponent Michael Saylor said that better regulatory clarity on crypto would speed up the institutional adoption of the asset class. The firm also splashed $25 million in its latest purchase of the asset.

The bullish stories caused a positive change in market sentiment as the crypto fear and greed index was seen as surging from 20 to 37 as of the time of writing. Seeing a more than 10% increase in the value of the crypto market, let’s examine how some projects in the top 10 performed.

Following consolidation with a few hikes over the past week, Bitcoin has seen more improvement in price. During the previous intraweek high, the apex coin gained 4% owing to the relative stability and little hikes it experienced. The coin performance during this period was a little below par as there were a couple of dojis from the timeframe under consideration.

Looking at the chart above, it is impossible not to see a couple of dojis from the last seven days. BTC started the week with very little volatility as the difference between the high and low was not up to 5%. The cryptocurrency retraced to $36,631 but surged to $38,776  and closed the intraday activity around $38,400.

Tuesday saw more minute trading volume than the previous trading session. The intraday activities began and ended with the top coin shuffling between $38k and $39k.

BTC saw the biggest downtrend on the third day of the week as it lost almost 5% and dipped to $36,618. The top coin resumed its consolidation the following day but saw it biggest break on Friday, as it gained more than 11% at the time.

The previous pattern of massive hikes over the weekend seems to be out of play. This is especially evident, as BTC has seen very little price action for almost 48 hours. The minute trading volume has resulted in more stability in price and bitcoin trading close to the first pivot resistance.

Following the bullish divergence the largest crypto asset experienced, the Moving Average Convergence Divergence is on the uptrend and may surge above 0 – signifying the of bearish dominance. The most recent increase in trading volume is also reflected in the Relative Strength Index (RSI) as it is currently at 55.

Ether is enjoying a second consecutive week of gains. Like BTC, the coin ranged for the majority of the last two intraweek sessions. Two weeks ago, the cryptocurrency failed to record any significant loss or gains. The past seven days have seen a change in this trend.

The second largest cryptocurrency closed the previous intraweek with a more than 17% increase.  it is on a recovery path like BTC and the rest of the market. Following a more than two-week long downtrend, the largest shook off the bearish sentiment over the last seven days.

Opening the week at $2,602, Ether retraced as low as $2,478 but recovered and closed at $3,058, hence the percentage gained. The coin saw little hikes that saw it close Monday with an almost 4% increase.

Ethereum suffered its biggest seller’s congestion on Wednesday as it lost an equal amount of the accumulated gains at the start of the seven-day period. The cryptocurrency was seen shuffling between $2,950 and $3,100 throughout the last 48 hours of the period under consideration.

Following ether performance over the last seven days, the bulls appear to be having the most of the spotlight. As with the largest cryptocurrency, the Moving Average Convergence Divergence is on the uptrend and may surge above 0 – signifying the of bearish dominance. The most recent increase in trading volume is also reflected in the Relative Strength Index (RSI) as it is currently at 58.

Two weeks ago, BNB kicked off the intraweek trading session a little slow, and the asset was unable to recover from its previous retracement. However, the coin was seen consolidating with a few hikes that saw it gain almost 3%. Unfortunately, the intended surge was absent.

Binance coin price movement has improved over the last seven days as it is currently up by more than 13%. Market fundamentals are fairly flat as there no news on the asset. Nonetheless, the cryptocurrency seems to be benefitting from the general market sentiment.

BNB opened the intraweek activity at $377 and closed at $420. The cryptocurrency surged to a high of $431 but flipped the $388 support on the first day of the week. The latest feat by the crypto asset has seen edge closer to flipping the 50-day MA. Moreover, the fourth largest token is trading above it pivot point.

The chart above shows the exchange token as been in an uptrend since the fourth day of the past week. Binance coin may continue this trend as MACD’s histogram shows the digital asset more buying actions. RSI agrees with the preceding statement as it is currently at 57.

ADA was unable to recover from the price dip it suffered on the first day of the past two weeks. The 5% drop on Monday was succeeded by further retracements. This led to concerns of the coin surging with the rest of the market as it failed to enjoy stability like most cryptocurrencies.

However, these concerns were allayed as the sixth coin by market cap gained more than 10% during the past intraweek session. Cardano is on its way to $1.2 as it edges closer to its pivot point.

Kicking off the week at $1.o3, the coin was seen consolidating for most of the week. ADA dipped to a low of $1.01 but saw the buyers intervene as they rallied the market to close at $1.14.The following days after this incident saw the asset pick up momentum and surge to a high of $1.17. Cardano will look to gain stability above $1.18 and test $1.2.

While most cryptocurrencies saw relative stability and a few hikes last two weeks ago, Solana dipped by 6%. After incurring a more than 7% loss at the start of period under consideration, the SOL/USD pair consolidated throughout the following days with little corrections.

The pair was no doubt plagued by several sellers’ congestions that pushed prices to test the second pivot support and succeeded, but for a short time the asset met buyback.

The previous intraweek session saw the seventh-largest alt start a little slow but picked up momentum as the week progressed. With the uptrend intact, the SOL/USD pair was mostly bullish during the period under consideration with few hikes.

However, the coin suffered a 7% depreciation on Wednesday as several short term sellers’ congestions pushed prices from the pivot point but failed as buyers rallied the asset to $112, gaining more than 10%.

Unfortunately the slight improvement was not enough to pull the asset out of the bearish dominance. However, we observed that the Moving Average Convergence Divergence (MACD) is closer to 0. With most surges, the $110 support still holds and may continue this way as SOL will aim to flip $130.

The eighth largest coin by market cap has seen a lot of volatility lately. Ripple recorded a 4% decrease last two weeks ago as it joined the list low performing low token at the time. Since its death cross some days back, the coin seems to be experiencing more price consolidation than dip. Unfortunately, the price range came to a halt during the previous intraweek session

As with BTC, the above chart suggests that XRP saw massive uptrend over the last seven days as it opened trading at $0.60 and closed at $0.68. The closing price suggests that it is up by more than 10%.

The most recent hikes the eighth coin by market cap experience in the past seven days, have resulted in it testing and flipping its pivot point. As with most cryptocurrencies, ripple seems to be exiting the bearish dominance as suggested by MACD.

Last two weeks, Terra failed enjoy price stability as with most digital assets. It suffered retracements resulting in the cryptocurrency losing a larger amount of its value per unit. It opened that period at $69 and closed exchanging at $52 – a more than 33% decrease.

The previous intraweek session was different from the highlighted timeframe. LUNA opened the previous seven-day period at $48 and closed at $56 – signifying a 21% increase. The coin saw a high of $58 and low of $43 at the time.

We observed that the digital asset under consideration flipped the $50 resistance and has held the mark as support since ascension. The highlighted mark may not be tested any time soon as terra experienced a bullish divergence less than 24 hours ago.