The crypto market is seeing a lot of consolidation as of this time. Following the short burst the market experienced at the start of the week, the industry has been in a stalemate with very little to no increase or decrease. Nonetheless, the bulls seem to edging in the struggle against the bears as we observe slight progress in the crypto market capitalization.

Many will consider the crypto space a little dull considering the above statement and to cap it all, so far, we have seen no news that could affect the market positively or the opposite. Regardless of the lack of market moving stories, a build-up to one is in the making in the ongoing Digital Assets and the Future of Finance: Understanding the Challenges and Benefits of Financial Innovation in the United States.

Market sentiment is also seeing little improvement as the Crypto Fear and Greed index is gradually rising. Last week, the metric was in a downtrend and dipped as low as 18 but is currently at 27. We also observe the steady rise in the Index over the past four days as seen in the image below. 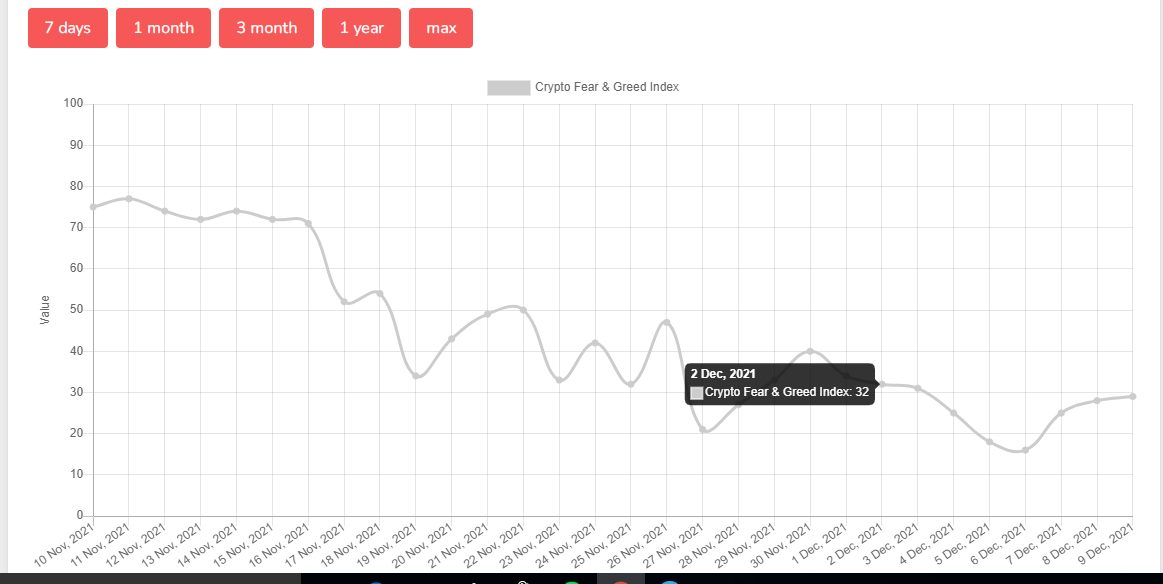 Currently, most cryptocurrencies are down by several percentage points – wiping out gains that accumulated on Monday. With an overview of the market so far, let’s examine the actions of some cryptocurrencies in the top 10.

The apex coin has not had as many surges as many would anticipate. The coin is seeing a lot of price stability with little to no price hikes. As of the time of writing, the candle representing this week is looking more like a doji – having a longer wick with a smaller body.

The preceding statement was based on Bitcoin’s performance, starting on Monday, to the time of writing. The largest cryptocurrency by market cap opened trading at $49484 and surged as high as $50986 on the first day of the week. The coin saw a low of $48656 during the time under consideration and closed the intraday session with little profit.

On Tuesday and Wednesday, prices were a little bit stagnant as BTC failed to record any significant losses or gains. Currently, the top coin is exchanging at $49,200 per unit. It is down by 2% as it opened the day at $50,535 and has seen a low of $48,948.

Bitcoin is still bearish as suggested by the Pivot Point Standard. The chart above shows the top coin trading below the first pivot support at $50,300. Nonetheless, we saw little progress as BTC surged past the mark thrice but failed to stabilize above that level – leading to the current situation.

The $52,000 resistance still stands as the last attempt to break the barrier stopped short of less than $10. The most valued cryptocurrency has seen a low of $47,111. considering price recent price movements, there are fears of further price slips. Will we see another “Black Friday?” Lets see

The sixth largest coin by market cap is a little lower than when it started the week. We observed that the bulls are putting up a good fight against their counterparts over the past four days as the coin ended two days in profit.

The current feat is noteworthy, as the same can be said if the cryptocurrency over the past fourteen days. Unfortunately, the bullish moments are short-lived, as Cardano is down by more than 5% and is showing signs of starting an uptrend as suggested by the Pivot Point Standard (PPS).

One of the most dreaded events just took place on the chart. Both the 50-day and 200-day Moving Average just intercepted – signifying a death cross. The first pivot support at $1.2 held out against attacks and is one level to watch.

The seventh largest coin by market cap has seen a lot of volatility lately. Ripple recorded no significant loss or gain today but surged as high as $0.93 and retraced, hitting rebound at $0.83. The candle representing the current intraday session is doji but red: showing slight seller congestion.

Regardless of current market conditions, the above chart suggests that XRP has been in an uptrend since the start of the week as it opened trading at $0.80 and is exchanging at $0.86 as of this time. The most recent price level takes the coin a step away from the first pivot support.

The Moving Average Convergence Divergence (MACD) shades a ray of hope as the fast line is about intercepting the slow and may give off a bullish signal. If the uptrend remains intact, XRP could hit $0.95 before the end of the week.

The past 20 hours have been the worst for Polkadot since the start of the week. The cryptocurrency is down by more than 8% as of this time as it started the intraday session at $29.8 and saw a high of $30.1 but is currently trading at $27.

DOT lost its first pivot support as its price at this time shows the ninth largest coin exchanging below the mark. The cryptocurrency was very promising on Tuesday as it saw hikes of 8%. Unfortunately, the latest streak has wiped out the gains that were accumulated.

There is hope in sight as both MACD lines descend more below 0; the boundary between a bullish and bearish asset. More fears as the 50-day MA is also taking a dip and threatening a death cross if market conditions don’t improve.

Following a quick surge that saw Terra climb up the rankings by market cap, the project has maintained its bullish status. Still holding on to the tenth spot, LUNA is considered one of the “Big Boys” and has succumbed to the retracement affecting them.

Although still trading above the Pivot Point, the LUNA/USD pair fell below its first pivot resistance and is on course to test the PP. More worrying for the bulls is the Moving Average Convergence Divergence (MACD). The fast line is about intercepting the slow and giving off a bearish signal that may trigger a selloff.