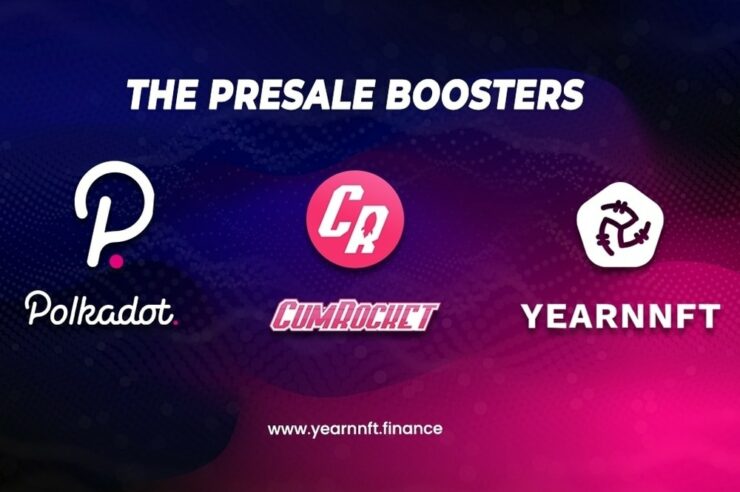 Cryptocurrency investors should understand the entire scenario of a token presale before investing. A token presale is initiated before the ICO launch. In a presale, the startup or project offers tokens as rewards while they are still under development before making them available to the common public.

The core purpose of the token presale is to raise the essential funds for future development of the project. The token presale can also be used to fund the operations resulting in the ICO launch. Projects offer tokens at relatively discounted prices as the risk is higher while investing in token presale.

There are some trending projects and tokens that have successfully experienced presale closure. Popular names include Polkadot and Cumrocket, known as popular tokens whose presale gave them a high token boost.

CumRocket [CUMMIES], Polkadot [DOT] and YearnNFT [YFNFT] tokens are all cryptocurrency blockchain projects that launched a presale. We believe that this is a well-planned strategy to boost the price of their token assets after the launch.

CumRocket and Polkadot have officially announced their token presale and are now available on various cryptocurrency exchange platforms. Whereas YearnNFT Token presale is currently in the Round 1 presale stage and is planning for an incentivized 2 weeks of presale following Round 2 before the token launch.

These crypto tokens have proven to be a game changer, emphasizing investor benefits and raising the asset value in return. Such exciting project outlines their protocol standard which makes them unique in nature. Crypto enthusiasts signing these projects can enjoy double rewards, future offers and enhanced security while embarking on a success journey.

The team behind these projects are passionate developers with complete knowledge about the latest technologies and concepts. The project backers also show a proven track record of successful projects in the crypto sphere.

They have implemented the best strategies and milestones to become the trusted and transparent project team members that have attracted a large community of investors. The smart contract and roadmap of these projects has now deployed, verified and audited, promising investors to secure their funds.

These three tokens have good results in terms of great returns and CumRocket and Polkadot are already listed on multiple exchanges. YFNFT, though, is following the trail of these successful token to get listed on ApeSwap and PancakeSwap soon after the presale in December.

YearnNFT Finance is hosting its much-anticipated presale which started with Round 1 from 19 November 2021 and will start with the Round 2 phase from 1 December. The YFNFT token will launch on PancakeSwap and ApeSwap right after the presale Round 2 ends, but the date has not been disclosed.

According to the updated announcement, these three projects allow clients to freely invest and diversify their portfolios using their entire project space. YearnNFT marketplace has also seen a significant surge in demand since its presale launch for YFNFT assets.

The top trending projects and marketplaces are established with a sore fundamental idea and belief. They entirely emphasizes on the importance of like-minded community, their unmatched power and supportive response in such sort of magical alliance.

The team announced its token presale to secure sufficient liquidity for the protocol and nurture constant buying pressure on the asset even after the closure of fundraising program. Earn YFNFT tokens as it will definitely help you avoid dips after its official launch on PancakeSwap and ApeSwap. YearnNFT will be one of the best projects among CumRocket and Polkadot of 2021, demonstrating lots of potential.

According to the experts, right after the presale and YFNFT token listing on exchanges, the price will hit 300x of its current rates. Over the past few weeks, these projects have also experienced deep community interest getting positive response.

YearnNFT and subsequent projects appreciate the potential thoughts, enthusiasm and support. We believe that such projects have an important protocol and concept plans that will open the gates to exclusive and ambitious community projects. The YFNFT team facilitates to continue their collaborative work alongside the community and crypto lovers.

To learn more about such new projects, their presale, and upcoming developments with respect to the roadmap; please check out their social media platforms.