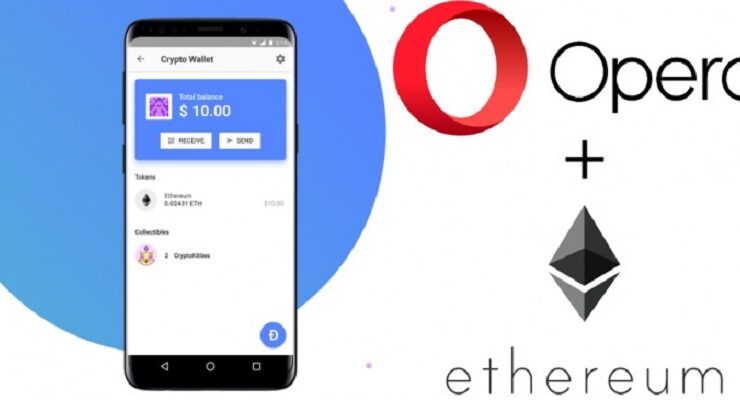 Popular web browser, Opera, has today announced the release of the Android version of Opera Web 3.0, a decentralized browser that comes with a built-in Ethereum wallet.

According to TNW, the announcement was made at the ongoing Hard Fork Decentralized 2018 conference in London and makes Opera the first browser to introduce support for blockchain technology and cryptocurrencies.

The Opera Web 3.0 was specifically designed to make it easier for surfers to interact with the decentralized web (a collection of Decentralized Applications), as well as make transactions with the built-in Ethereum wallet.

Speaking shortly after the release, Opera executive VP Krystian Kolondra stated that the new web browser would ultimately promote the adoption of cryptocurrencies by everyone who already has access to the internet.

“Our hope is that this step will accelerate the transition of cryptocurrencies from speculation and investment to being used for actual payments and transactions in our users’ daily lives,” he said.

Right now, Opera has over 100 Million users globally who will now try their hands on using cryptocurrency to make payments for online shopping and other services.

The company is also working towards the launch of the full version of the Opera Web 3.0 browser for Windows, MAC, and Linux. A beta version of the desktop software was released in September.

What You Should Know About Opera Web Browser 3.0’s Ethereum Support

An update provided by the browser company in June revealed that the newly released browser would for a start support the Ethereum network and include a built-in wallet.

Project lead Charles Hamel said this was because the Ethereum Network has “the largest community of developers building Dapps and has gathered a lot of momentum behind it.”

So users of the browser will easily surf Ethereum-based DApps on devices while also having the ability to send or receive Ethereum tokens with the built-in wallet.

Users cannot use the wallet to store Bitcoin for the meantime. They can only store Ether (ETH) and other ERC20 compliant tokens.

The built-in wallet on Opera Web Browser 3.0 also synchronizes with the web version of the browser and allows easy management of Ethereum tokens on multiple devices.

In the future, Opera hopes to add support for other popular cryptocurrencies even though they are yet to name any contenders.