A recent analysis of stock performance over the past two years shows that business intelligence company MicroStrategy stands out from all major assets and indices, garnering 116%. The improvement comes at a time when the company has adopted a Bitcoin purchasing strategy. 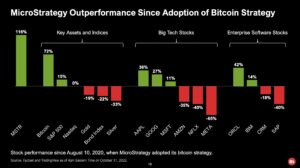 MicroStrategy’s stock, MSTR, currently trades at $257.2. Despite that, its cumulative performance outweighs other top assets, as revealed in the chart above.

The stock market indexes of popular assets like the S&P 500 and NASDAQ sat way below the performance of MicroStrategy. S&P 500, for example, recorded a 15% increment in its performance even though its stock currently sits at $3,856.1. NASDAQ, on its part, recorded a 0% increment. Its index reveals that it has a trading price of $10,890.85.

The intelligence company’s MSTR also outperforms big tech stocks like Amazon and Meta, which saw a 35% and 65% decrement respectively.

MicroStrategy’s performance in the analysis shared may be attributed to its Bitcoin buying spree, as it started seeing such performance only after embracing Bitcoin.

In August 2020, Michael Saylor, the co-founder of MicroStrategy, began the Bitcoin purchasing spree, garnering a total of $250 million worth of BTC. He termed Bitcoin to be a “dependable store of value.” As a result, his company kept to a buying policy.

On March 29, MacroStrategy, a subsidiary of the business intelligence company, received a $205 million loan. Bitcoin was used as collateral to secure the loan. After obtaining the loan, the company used the borrowed funds to buy more bitcoins.

Phong Le, the newly selected CEO of MicroStrategy, commented that the collateral could need some fund refill if BTC’s price drops below $21,000. However, Saylor’s comment downplayed Le’s, as he said the asset will need to drop to as low as $3,562 before the company will get a margin call.

Meanwhile, as of September, Bitcoin’s price decline has rubbed off on MicroStrategy as the company held a loss of about $1.5 billion. Bitcoin’s price has held strongly to the $20,000 threshold over the past few months. At the time of writing, the asset traded at $20,400.