The MetaMask mobile app is set to exit beta mode this week, becoming available for public download for the first time according to a Bloomberg report.

The new release is a mobile version of the popular Ethereum-focused wallet and browser extension, MetaMask. With over 400,000 users, MetaMask is arguably the largest used tool for Ethereum network participants, who until now are confined to using the application only via a browser extension.

A beta version of the MetaMask mobile app was released in July 2019, with the team promising to roll out a full version during the fall of that year. However, even though the full rollout has taken a long time to arrive, the beta version has already attracted some 100,000 users according to data from Google Play Store. 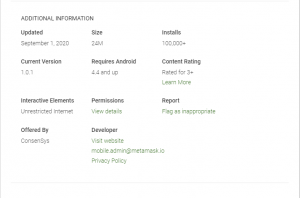 A new version of the MetaMask mobile app (V.1.0.1) was released this week, confirming the project’s exit from testing mode, even though it is still marked “Beta” on Google PlayStore at the time of writing.

Is the MetaMask mobile app for iOS now available?

Per the Bloomberg report, the MetaMask mobile app for iOS will be released on Apple’s App Store this week. At the time of writing, however, the best testing pool for the app on the Apple store is full, while a full release is yet unavailable for download.

An explanation for the delay does not like involve the mobile app development company being used by MetaMask or its team of developers. Instead, it could be a delay in approval by Apple.

Meanwhile, it is worth noting that a public release of Ethereum’s most used tool for accessing decentralized apps (dApps) including DeFi protocols could not have come at a better time for the burgeoning DeFi space.

Having crossed a $7 billion valuation last month, the complex DeFi space and its yield farming opportunities are still arguably void of participation from the average cryptocurrency investor. Being confined to only a browser extension also potentially increases the barrier for experienced investors to remain actively involved.

A MetaMask mobile app will low these barriers, with the latest release also including improvements to minimize the amount of information that users share when using Ethereum-based apps.

Speaking about the new feature, Dan Finlay, a MetaMask lead developer told Bloomberg that “rather than providing a checking account number every time, a user could create different Ethereum accounts to use at various sites to cut down on tracking.”