Recording a price just below $9400 at the time of writing this report, Bitcoin is up over 30% since the start of the year, with many teasing the upcoming halving and the asset’s increasing scarcity as reasons for the bullish performance.

However, data from the analytics site, Skew.com suggests that even though these bitcoin economic properties could be fueling a run, there is a notable increase in the number of bitcoin open futures interests globally. Some of the largest derivatives exchanges in the industry are seeing huge volumes with numbers constantly on the rise since the turn of the year. 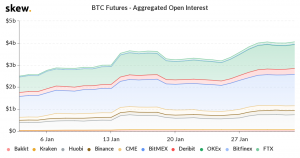 For the basics, open interest is a metric that measures the total number of outstanding derivative contracts (in this case futures and options) that have not been settled. The data from Skew aggregate these numbers in monetary terms.

A big takeaway from the chart is that the Global bitcoin futures open interest at the time of writing is over $4 billion, a more than 60% increase from the $2.5 billion figure recorded at the start of the year.

Evidently, the increase although directly correlated with the rise in BTC price could be considered an indication that the derivatives market for bitcoin is constantly maturing and now attracting more interest from both institutional and retail traders globally.

Recently launched derivatives platform Bakkt is among the top ten trading venues for bitcoin futures contracts even though there options product is seeing little to no trading activity according to reports. On the contrary, the bitcoin options at a competitor, CME Group has spiked in volume since it went live earlier this year.

In the long term, a complete maturity of the derivatives market for bitcoin could significantly reduce the cryptocurrency’s highly volatile nature, and potentially open it up for mainstream adoption.