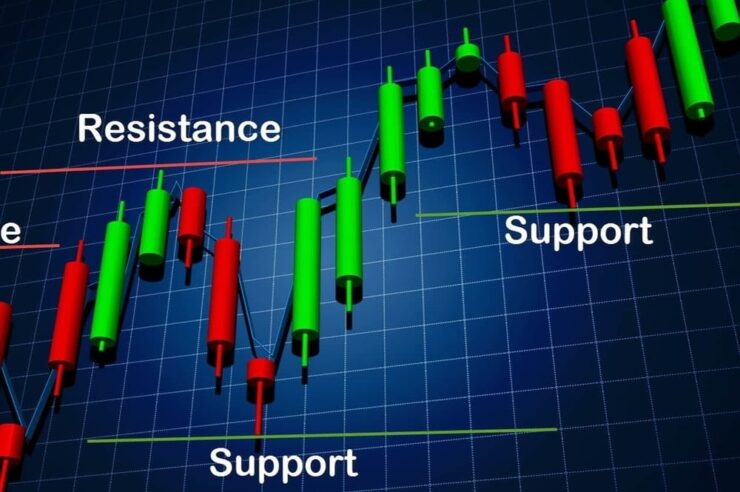 The seventh largest coin by market cap has been on the downtrend for most of the past two months, leading many to examine Cardano support levels. Following a massive increase that saw Cardano (ADA) trade above $3 during the first week of September 2021, the cryptocurrency has been on a free fall.

More traders are concerned about the token’s recent performance and wondering if some historical support levels will hold. This article is designed to provide in-depth analysis of ADA and if it will retrace below $1. We will discuss the following:

What are resistance and support levels in technical analysis?

Support and resistance can be referred to as one of the most important pieces of technical analysis. They are commonly used to describe perceived barriers on the chart that may play in favor of the bulls or bears.

Resistance is traditionally known as price levels, where an uptrend is expected to stop or pause. On the other hand, support is a price mark, a downtrend may pause or stop. Why are these two metrics important for technical analysis?

Retracement may be halted due to increases in demand and fewer supply while an uptrend may pause because of an increase in supply where there is less demand. This phenomenon has played out over and over again on most assets at some price levels.

Taking note of this mark can help predict the end of a surge or dip. As a result, these two marks will be the main tool in this write-up.

We consider five vital Cardano support levels with the aid of the chart below.

The $0.8 support is not considered a critical mark today as ADA is currently enjoying stability above $1. Nonetheless, this was one of the most important levels during the second month of 2021.

The seventh coin by market cap was on its bid to surge above $1 at that time but faced strong retracement at $0.9 that saw the asset continually test the barrier under consideration for more than five times before surging past the mark.

We observed that after ascending above $0.99, the $0.80 support has not been tested as price slipped below $1 a few times but the retracement was halted before or on $0.90. However, the constant price lingering at the current price is raising concerns as to whether the highlighted support will be tested.

The $1 support is considered the most vital Cardano support level today. Based on the concluding statement of the preceding paragraph, we deduce that ADA is currently within the sub-$2.

The mark was tested for the first time since July 2021 on Jan 22. With the token trading above $2, the was presumed to never fall below that level. Unfortunately, the recent downtrend that has lasted more than 4 months now has made this assumption void.

We saw the $1 support flip some days ago but hit rebound at $0.91. However, it is important for the bulls to hold prices above this price mark as failure may result in a retest of $0.80.

Although considered a resistance at the time of writing, the $1.8 support was considered a critical support. It served the role of deterring further dips below it as demands were concentrated there.

The importance of this level cannot be overemphasized as we are seeing the effects of losing the price mark. Once the barrier under consideration loses its strength and breaks, it leaves the $1 support open.

Before now, a scenario like the one described above played out in May 2021 as the mark under consideration was flipped, prompting further dip to $1. Interestingly, $1.8 does not survive as resistance for long and may resume its role once Cardano regains composure above it.

As with the preceding price mark, the $2 support is considered a resistance at this time. However, it was once perceived as one of Cardano critical support as it served as a deterrent from further price slips as more demand over supply was recorded in the region.

The level under consideration was a firm barrier when ADA was valued above $3. Unfortunately, it gave way as selling pressure increased. The strength of the said mark can be seen in how many trials it takes to flip it.

The $2 support was tested for the first time since ascension barely two weeks later. The vital level held out for more than 30 before losing its strength. Interestingly, even after the flip, ADA continued to exchange close to it for another 21 days before further dip.

The $2.7 support was considered a critical support. Although a resistance as of the time of writing, it also served the role of deterring further dips below it as demands were concentrated there.

The mark was the closest to the all-time high and stability above this level was considered a good fate for Cardano as it guaranteed a retest of the $3 resistance. However, flipping this level caused serious concerns among the bulls as to when the seventh coin by market will attain a new ATH.

Although not perceived as a strong support, it was important to keep ADA above this price mark as failure to do so opened up the $2 support.

It is important to note that support will break if the right amount of pressure is exerted. Three of the highlighted historic Cardano support levels are now resistance points. The $1 mark is under intense pressure and may break if the current market sentiment remains the same.

While this is no opinion piece, traders can compare the assets ATH with its current price as well as with other tokens (for instance Solana or Cardano) and reach their conclusions.

Should I worry about Cardano support levels in the long-term?

Nonetheless, the Cardano ecosystem is still growing and will be accommodating more tokens and decentralized applications (dApps). This is becoming more evident as it announced the release of its DEX, named SundaeSwap (SUNDAE). In addition to that, new dApps are expected to be released this year. Developments like this are sure to attract lots of new market participants and may potentially affect the price.