Investors in the DeFi project, CBDAO (BREE), are scratching their heads after it became evident that the people behind the project have vanished. The project’s website, Telegram group, and Twitter handles are no longer online, with the total lost funds exceeding over $1 million in ETH.

At the time of writing, the BREE token which had traded as high as $50 in early September was trading at a $0.43 price, representing a 99.1% decrease from that all-time high. 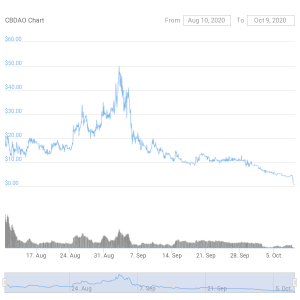 According to information from its now-deleted website, CBDAO dubbed the “Ultimate DAO sandbox” was a DeFi project that promised investors up to 30% APR. BREE tokens can be earned via farming and staking, with the project aiming to deliver a Governance as a Service (GaaS) solution that allows new decentralized autonomous organizations (DAO) to bootstrap their governance processes.

As per a detailed Medium post by a supposed investor, “the team had been developing the project and meeting deadlines,” and even “pushed a new website the night before the attack.”

The team had announced a token swap for users to swap BREE tokens for Synthetic Bree (SBREE) tokens, and it was a backdoor on the newest token contract that the attacker exploited. They minted 50,000 SBREE, converted to BREE, and dumped onto the open market in fourteen separate transactions for roughly $60,000. That was in ETH addition to the roughly $1 million that the project initially raised, leaving investors bewildered about why the paltry sum was the last act of the exit scam.

Will the identity of CBDAO founders be uncovered?

With the project existing for as long as two months, investors claim to have uncovered the identity of some of its founders and have already reached out to law enforcement agencies. Other crypto exchanges that reportedly did business with the CBDAO team, including Binance, Bittrex, Poloniex (listed SBREE), Somish Labs, and Etherscan (advertiser), have been contacted.

Meanwhile, angry investors who lost thousands of dollars to the CBDAO exit scam created a Telegram group vowing to uncover the identity of the project’s founders.