The recurring price correction has been a nightmare for the bulls. Last week, the market shed more than 8% of its value as it opened that trading session at $1.88 trillion but closed at $1.74 trillion. The $2 trillion  during that period.

Market conditions are yet to improve as another 5% was lost over the last 35 hours. The global cryptocurrency market was estimated at $1.78 trillion as at the start of the current intraweek session but is worth $1.69 trillion as at the time of writing.

Following the start of a bearish grip on the market, most projects in the top 100 are down by a few percent. The image below further shows how some assets are in the top 100. EGLD is the top loser as it lost more than 30% during the current intraweek session. 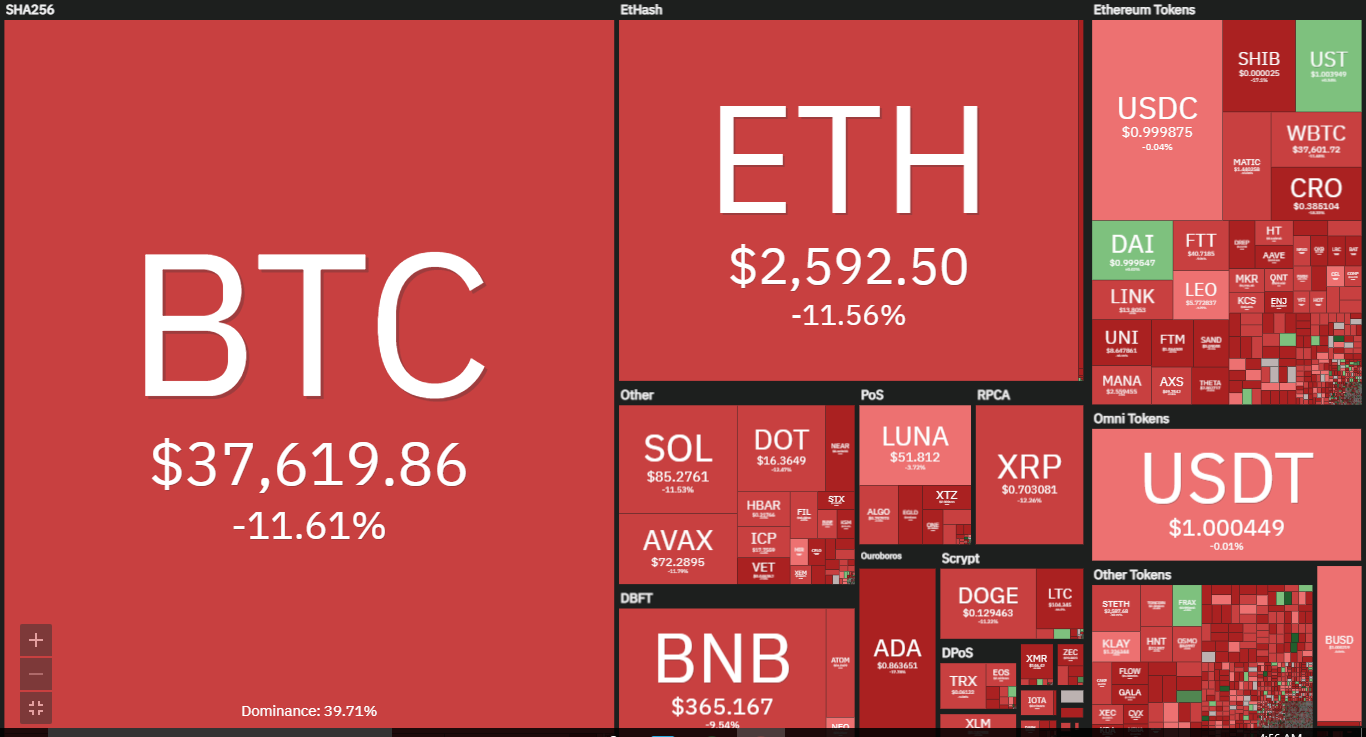 Following the invasion of Ukraine by Russia, tension has been as to how the crypto market will respond. We observed that most stocks are down by more than 10% with the top being DOGZ, losing 32% over the last 24 hours. Market action throughout the six days may provide a glimpse into how the sector under consideration will fare.

Here are the top five cryptocurrencies to watch this week:

Last week, Bitcoin opened trading at $42,078, but rarely witnessed any increase because of an immediate retracement on the first day of the week. Following a period of relative stability, it gained more than 5% over the next 48 hours – sparking hopes of a return to $45k.

The apex coin failed to perform it started a downtrend on Thursday. Like the previous session, BTC lost all its gains and may close the losing 8% as it closed the period under consideration $38,373.

Many critical levels were lost during that time. One such is the $40,000 support lost its strength as it flipped on Sunday and the largest cryptocurrency dipped as low $38k. The $37,000 support also gave way during the previous intraday high.

As the correction intensified, the $36,500 support came under test as the bulls failed to defend the $37k. The retracement caused BTC experienced a bearish divergence as indicated by the Moving Average Convergence Divergence (MACD).

Following the most recent dip, bitcoin recovered and closed in profits. Although significant, the rebound has sparked hopes of a return to $40k. To achieve this, long buyers must defend the apex crypto from further downtrend and hold the asset above $36,000.

The buyers appear to have started a rally based on the most recent price. However, the minute increase failed to cause notable changes in prices. Nonetheless, based on price movements we may conclude that the $36k support will hold through the provided the current market momentum is sustained.

Binance coin is one of the few coins that put up little resistance to the prevalent sentiment. Like BTC, the cryptocurrency started the previous intraweek session slow as it failed to record any significant increase or loss.

However, we note that it picked up momentum as the week progressed, gaining more than 8% over the next 48 hours. Unfortunately the asset succumbed to the bears as it lost more 4% of it value during that period.

Following a more than 48 hour long retracement, the bulls seem to have seized control of the market as BNB is enjoying little hikes as at the time of writing. The sudden turn of events during the past 24 hours has resulted in the token edging closer to testing the $375 resistance.

However, these little hikes are unable to push the cryptocurrency higher as we not the dwindling demand concentration at $360. The chart are silent as token experience a bearish divergence and is yet to show any signs of further uptrend.

We have observed that binance coin may dip as low as $335 if selling pressure intensifies. This may be a good thing for the digital asset as recent dip to that level as been met with massive buybacks.

Nonetheless, we note how the bulls are currently holding $360 support. Further defense of this mark may result in the exchange token testing $380 and flipping further resistance. Additionally, a slip of the previously mentioned mark may send BNB to the sub-$340s.

Like BNB, Decentraland also showed some resistance to the bearish market. However, it lost almost 5% last week as it saw a low of $2.61 and a high of $3.4. The end result of the previous intraweek session was not favorable as the buyers appeared to have the upper hand in the market at the start of that period.

The bulls have sustained price above $2.7 since the 3rd day of February. Unfortunately, the mark gave out as selling pressure intensified – losing its pivot point as well. The token opened trading at $2.8. The high suggests that the critical levels like $3.3 as well as $2.8 were lost due to the retracement.

Currently trading close to the highlighted mark. It is only a matter of time until the barrier gets tested. Unfortunately, we can’t turn to indicators as they are all still bearish. Why is MANA one of the cryptocurrencies to watch this week? Decentraland experienced a bearish divergence barely five days ago. However, we note that as bigger coins fail to surge, the token is known to be a safe haven for investors.

The above scenario played out last month and may likely be repeated this week. Nonetheless, we note how the bulls are currently holding $2 support. Further defense of this mark may result in the metaverse token testing $2.8 and flipping further resistance. Additionally, a slip of the $2.5 mark may send MANA as low as $$2.

While most cryptocurrencies lost a significant amount of their value during the previous intraweek session, KLAY gained more than 5%. The fairly new coin to the market saw a high of $1.3 and a low of $1.16 during that time.

The candle representing Klaytn price movement during the current seven-day timeframe is a doji– a stark reminder that the digital asset kicked off the week slow. One of the key supports that was lost during that period is the $1.20 which led to further downtrend.

The last three days have seen KLAY stay above $1.17 – making the mark a critical support. However, the cryptocurrency is at risk of testing that level as the previous selling pressure that saw the asset attempt to surge above its 50-day MA is absent as at the time of writing

We observed that klatyn is experiencing minimal price movement due to reduced trading volume. The coin see the same scenario as the preceding token. Additionally, MACD histogram is displaying a gradual increase in buying volume, which translates to the slight surge the cryptocurrency is experiencing. We may see the asset hit $1.4 this week.

Anchor Protocol is one of the projects that has shown resistance to the current bearish dominance. The coin no doubt saw a lot of volatility, like most digital assets, last week as it thrived during the various selloff that hit the market.

The token gain more than 14% during the previous intraweek session – creating new supports. Of all these levels, the $2 support appears to be the toughest as price dip was halted at that region.  That support was tested as the coin lost a whooping 13% of its value per unit on Sunday.

ANC is one is back to its bullish path as it is currently up by more than 20%. The cryptocurreny is one of the few coins that are enjoying relatively bullish actions. We note that the coin has gained more than 8% on the first day of the week.

The coin recent fit has made the 50-MA a key support in its bid to flip more resistance. Additionally, MACD histograms are displaying a gradual increase in buying volume – a possible sign of the continuation of the bullish trend. Anchor protocol may test the $3 resistance if the current trajectory is maintained. 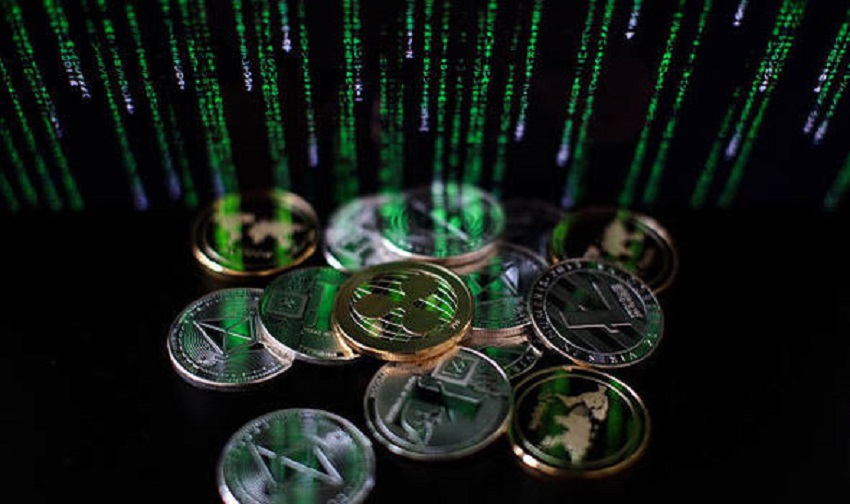