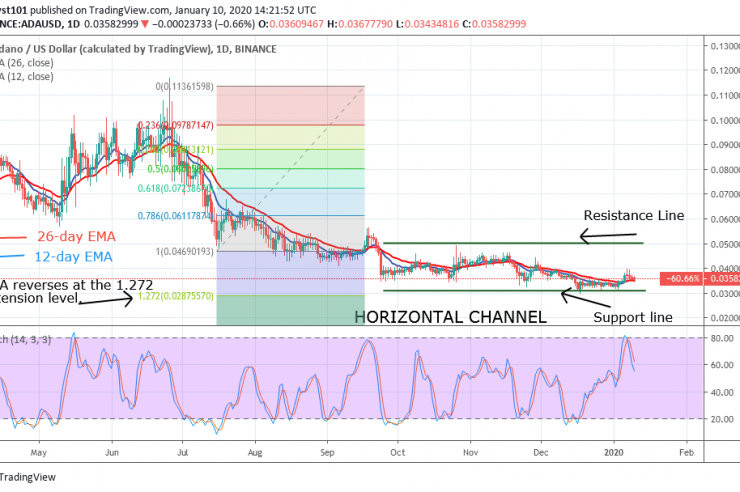 All the coins listed below are consolidating at the bottom of the chart either for a breakdown or breakout.

The following are the coins that are consolidating for a breakout namely: Cardano, Dogecoin and DASH. The Fibonacci tool has indicated their reversal at 1.272 as confirmed by price action. TRON and EOS may face further selling pressure.

Cardano is trading in a sideways trend. In the shorter time frame, ADA was in an upward move as it broke the resistance at $0.035 to reach a high of $0.039. The bulls could not sustain the price above $0.039, and it fell again to the $0.035 low. On the daily chart, the bulls broke above the EMAs but fell to the same support after resistance. 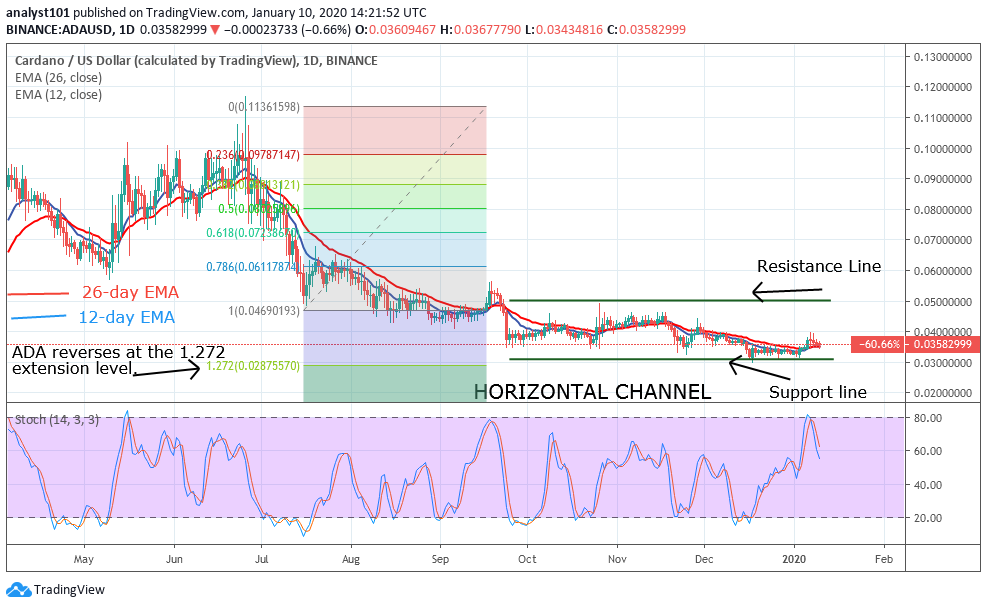 ADA had been in a sideways trend between $0.030 and $0.050 since September 2019. The coin is currently above the support of EMAs if it bounces it will rally above $0.040. However, if the bullish trend is sustained, the coin will retest the $0.050 overhead resistance.

Nonetheless, if the bulls fail to penetrate the resistance level, fluctuation will continue. According to the Fibonacci tool, ADA is likely to reverse at the 1.272 extension level. 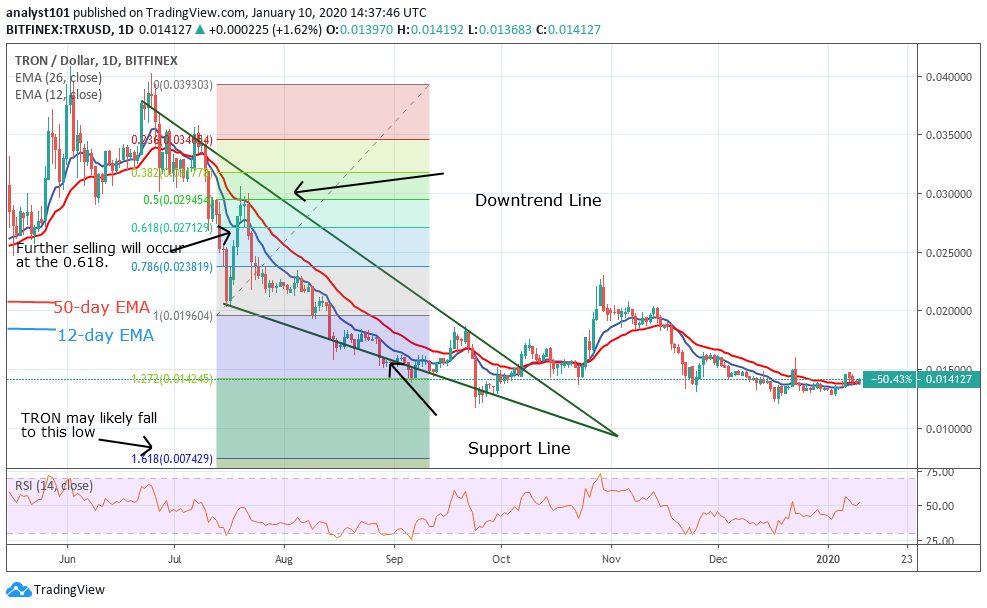 The upward move has been hampered because of a lack of buyers at a higher price level. TRON will need buyers at a lower price level to push the coin upward. From the Fibonacci tool, further selling will occur at the 0.618 retracement level indicating that TRON will fall to the low of 1.618 extension level. The Relative Strength Index Period 14 level 49 means that the coin is in the range-bound zone

Dogecoin is in a bear market. On December 18, the coin fell to a low of $0.0019 and commenced a consolidation. It appears the bears have exhausted the selling pressure as the bulls break above the 12-day EMA and the 26-day EMA. DOGE is likely to rise if the price is sustained above the EMAs.

We expect the coin to reach a high of $0.0025. Meanwhile, the market is above 60% range of the daily stochastic. This indicates that the coin is in bullish momentum. Besides, the Fibonacci tool shows that DOGE is reversing at the 1,272 extension level. 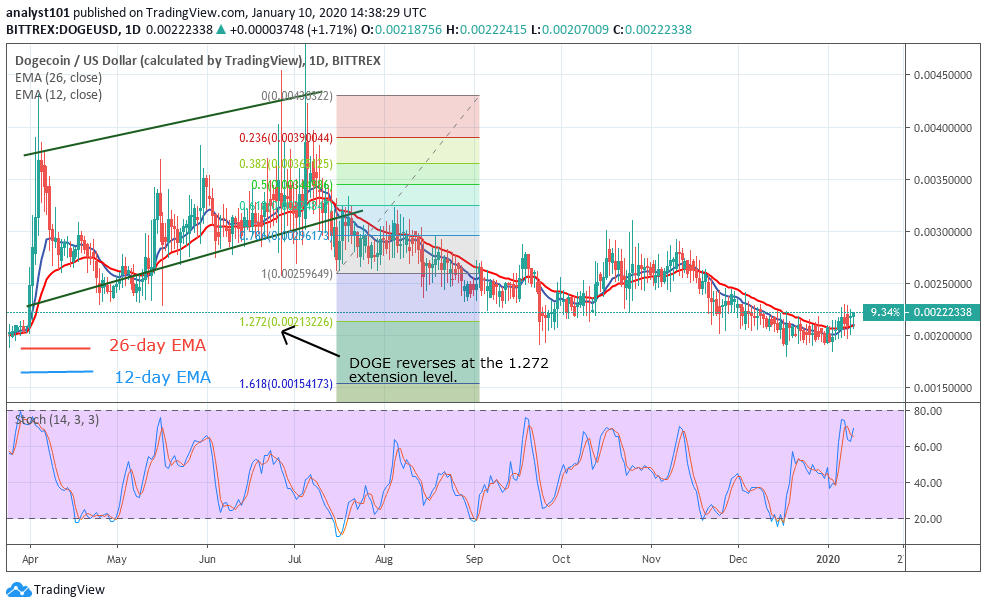 DASH is in a bear market. On January 3, DASH was making positive moves until the bulls were halted at the price of $58. The coin fell to the support of the EMAs. As the support holds the coin is an upward move to retest the resistance at $58. A break above the resistance will see DASH reach a high of $75 and $80. 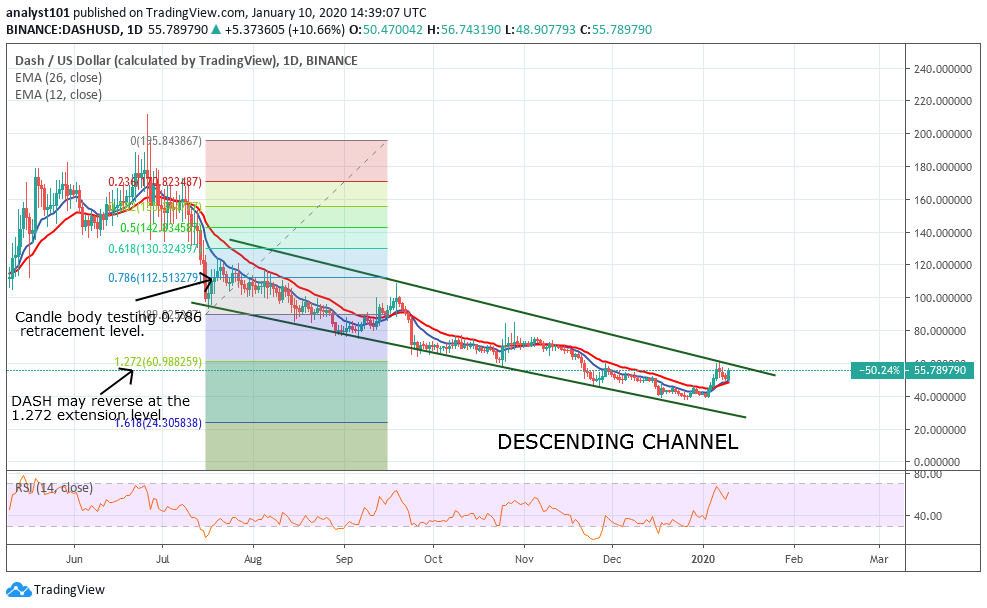 Conversely, if the bulls fail to breach the resistance, the price will fall to the low of $40. Previously, the market is consolidating above $40 before the upward move. Meanwhile, the Relative Strength Index (RSI) period 14 level 55 indicates that the market is above centerline 50. This suggests that the coin will rise.

The bulls had broken the downtrend line in October, and the price closed above it, the coin is presumed to have reversed. Meanwhile, the price is fluctuating between $2 and $3.30. Selling pressure will resume if the bears break below $2.0. 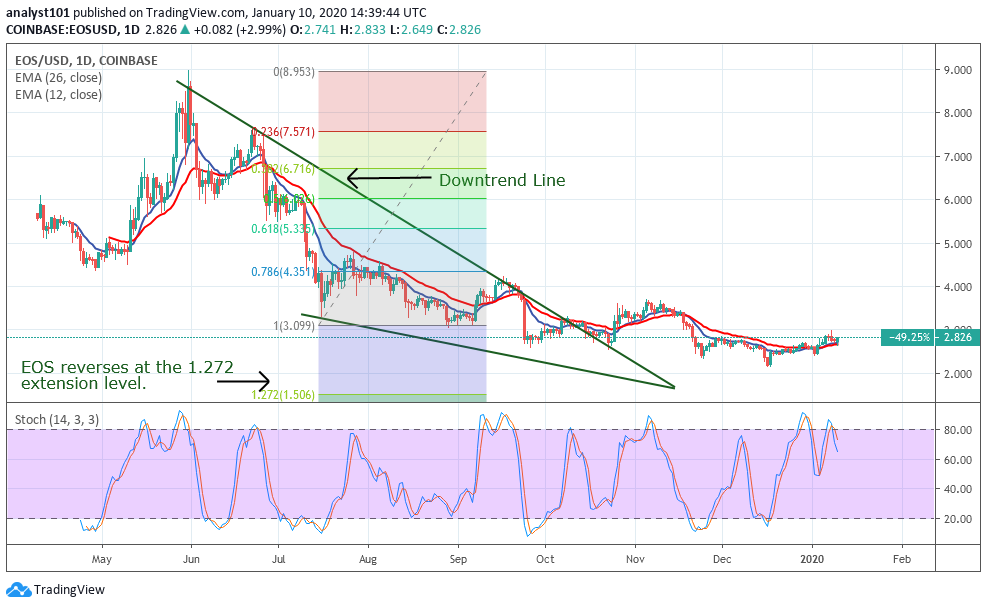 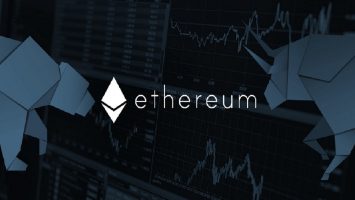