Virtually all the altcoins under consideration are bullish but are falling as price reaches the overbought region of the market. Sellers emerge to push prices down. A resumption of a fresh uptrend is likely as the market indicates bullish signals. Dogecoin is currently in a sideways trend as the coin is range bound between $0.0023 and $0.0027. 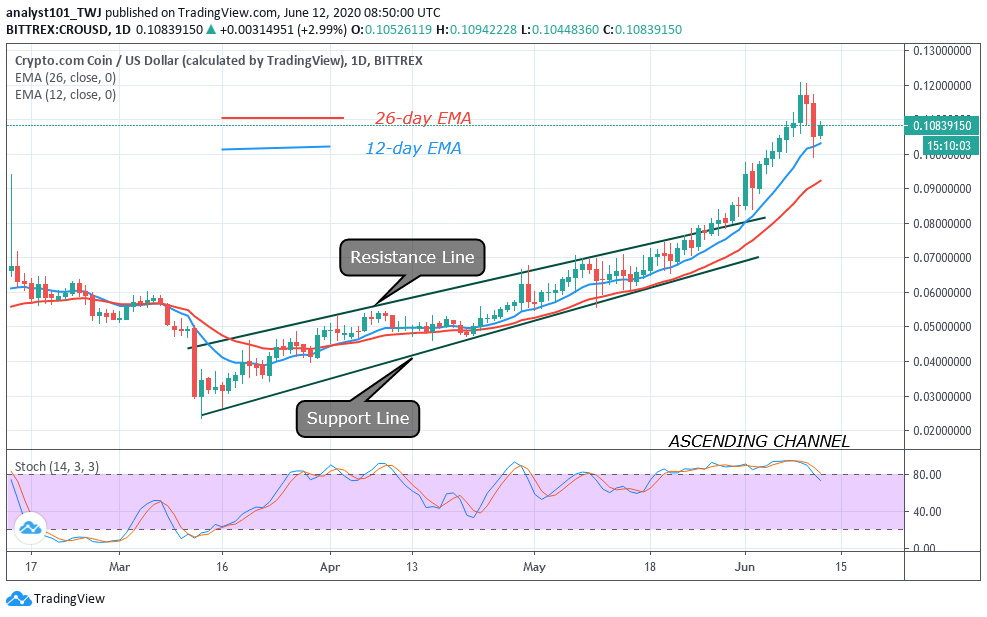 CRO has reached the overbought region after breaking the resistance line. Sellers emerged to push prices down. The market is on a downward move as price finds support at the 12-day EMA. The uptrend will resume if the current resistance is broken. Meanwhile, the coin is below 80% range of the daily stochastic. It means that the market is in a bearish momentum. This is contrary to the price action that is indicating a bullish signal. 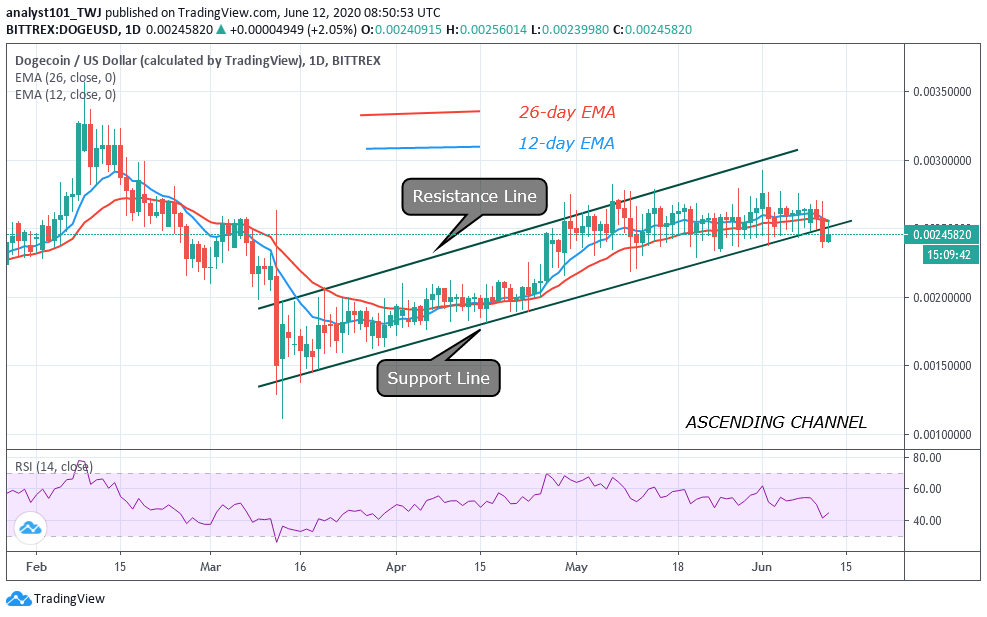 The market is still in consolidation. On the upside, if it is consolidating in an uptrend before a resistance, there is likely to be a breakout. Today, DOGE is moving up after breaking below the Support line. DOGE is currently at level 48 of the Relative Strength Index period 14. It indicates that the coin is in the downtrend zone and below the centerline 50. It may likely fall. 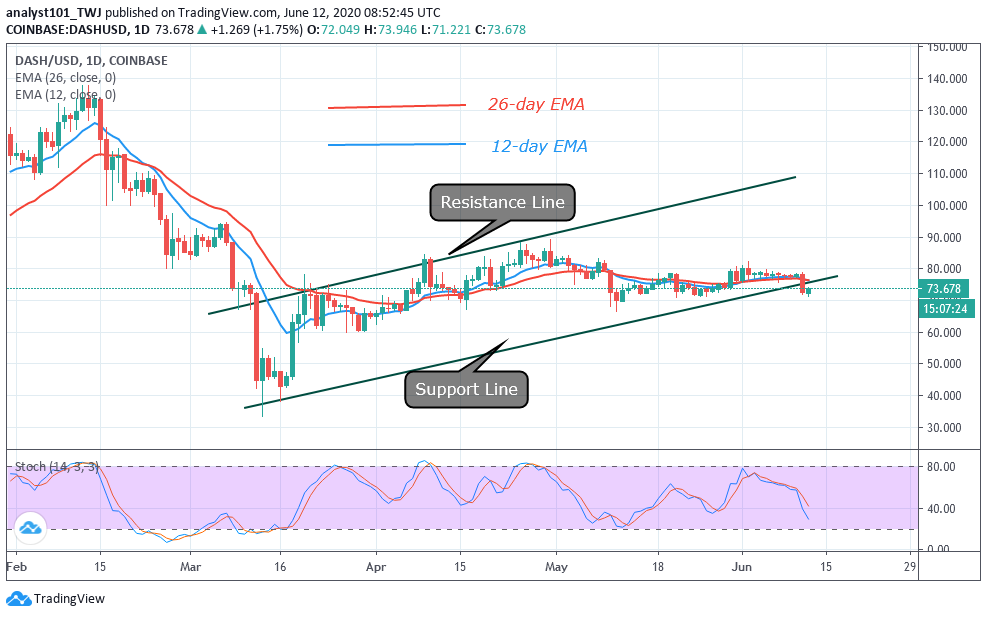 DASH continuing its downward move. It drops to $82 and after retesting the $82 resistance, it drops to $70. At the current low of $70, the crypto traded and moves up to retest the $82 resistance. On June 2, DASH encountered another breakdown as price reached the low of $76. After consolidation for over a week, the coin slumped again to $72. The price action is currently showing a bullish signal. Meanwhile, DASH is below 40% range of the daily stochastic. It is still indicating a bearish momentum that contradicts the price action. 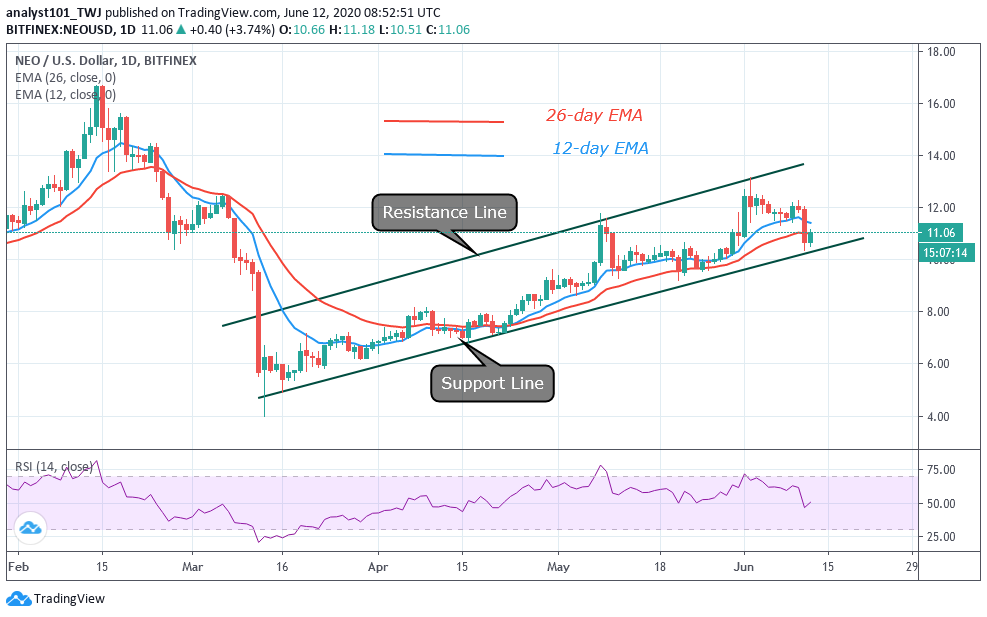 NEO is currently in a bullish trend. The bulls have struggled to push the price above two resistance levels but are still facing stiff opposition. On May 8 and 9, the bulls attempted to break the $11.50 resistance but were repelled. The bearish reaction pushed the coin to a low of $9.50.

The price corrected upward to retest the $11.50 resistance which was broken. Immediately, the coin rose to $13 high. At the recent high, the crypto reached the overbought region as sellers emerged. The coin is trading at $10.84 at the time of writing. It is also at level 48 of the Relative Strength Index period 14. NEO is in the downtrend zone and below the centerline 50.

Stellar is in an uptrend as the coin faces major breakdown after reaching overbought regions of the market. In its first upward move the market reached a high of $0.076 and was overbought. Sellers emerged as the market fell to $0.060 low, after a period of consolidation, the price corrected upward. 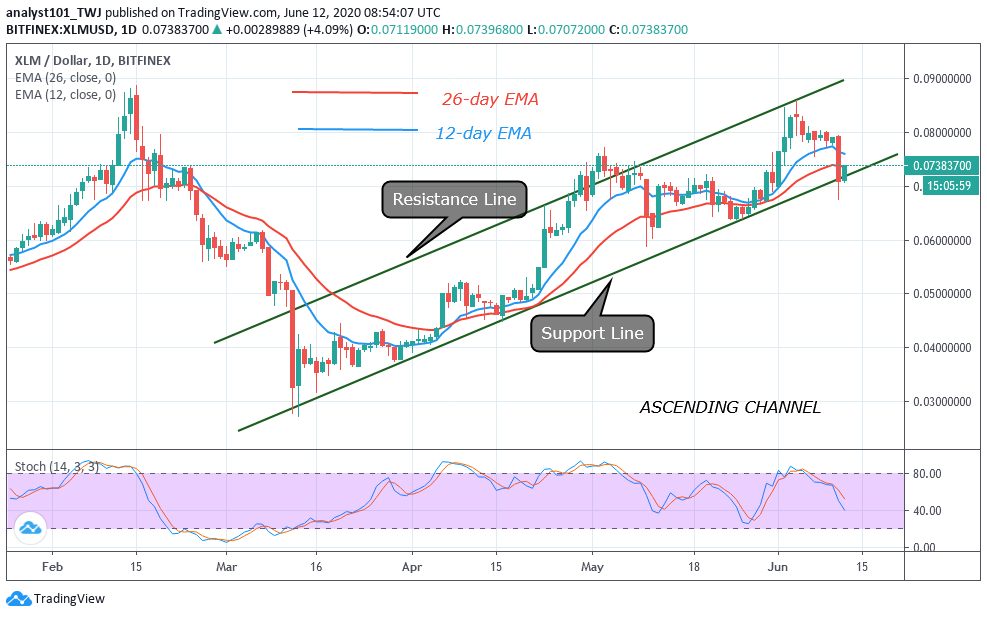 Stellar is back as the market reaches another high of $0.085. At the recent high the market was overbought again. Stellar has fallen and it is trading at $0.070 low. The crypto is resuming a fresh upward move to move to the next previous high. The coin is expected to rise and retest the next resistance at $0.090. XLM is below 50 % range of the daily stochastic. It indicates a bearish momentum but the price action is showing bullish signals.