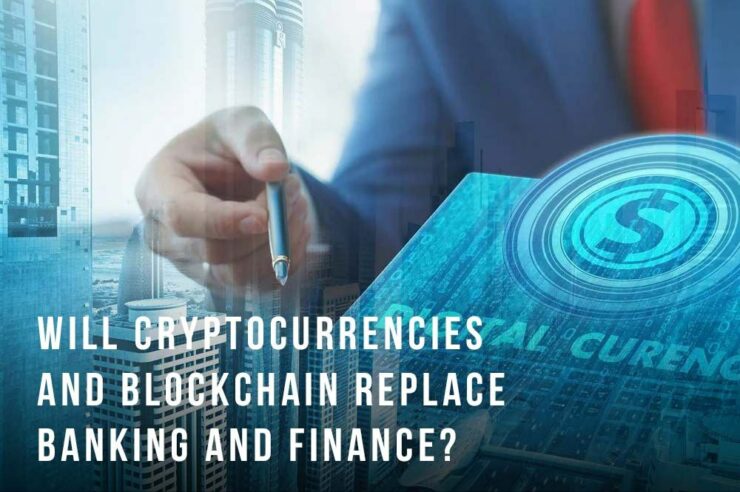 Cryptocurrencies and blockchain will not replace banking and finance. Instead, it will likely improve existing systems and eventually co-exist with banks. The financial landscape could include an environment where banks offer crypto-related services such as those that enable customers to store their crypto assets in bank vaults.

The meteoric surge in popularity of cryptocurrencies this year has caused many to wonder, is crypto a threat to banks? Could they also represent a serious threat to central banks throughout the world? The truth is that central and commercial banks face an existential danger from cryptocurrencies. Thus far, these entities have responded by saying, “If you can’t fight them, join them.”

Is Crypto Better Than Banks?

At this time, cryptocurrencies are not better than banks. However, this does not mean that the industry cannot grow to compete with or even overtake banks. Already, many users already consider crypto better than banks when it comes to moving money across borders.

Cryptocurrencies offer relatively faster settlement times and ease of transportation when compared to banking payment systems. These frictionless transactions make crypto better than banks and attractive to many users.

Another area where crypto is currently better than banks is in terms of interest rates offered in deposited cash dollars. While many commercial banks offer an interest rate of less than 0.1% for deposits, crypto lending platforms offer as much as 6-10% interest rate on stablecoin deposits.

Given the growing benefits crypto offers over banks, it is not surprising to see some who wonder if crypto is a threat to banks.

Is Crypto a Threat to Banks? DeFi Might Make it Happen

Decentralized finance (popularly known as DeFi) is a sector in the cryptocurrency space that many believe can and will replace banks and traditional finance. DeFi basically involves the use of blockchain-based smart contracts and protocols to facilitate financial transactions, without the need for an intermediary.

Faster transactions, greater levels of security, reduced costs, and smart contracts are all advantages of decentralized blockchain-based systems over traditional banking. With DeFi, investors can already lend or take out a loan, raise cash for initiatives, and make payments. And it’s only the beginning.

At the time of writing, data shows that over $200 billion dollars is already locked in DeFi protocols. Will this extend to a trillion dollars or more over the next five years or decade? Only time can tell.

However, if the DeFi space really takes off, then cryptocurrencies will not only be a threat to banks but can also readily replace fiat as a store of wealth, medium of trade, and unit of account in all of its applications. Thus, it is not surprising that many people believe that a more efficient digital decentralized economy might quickly replace banks and finance. Will it, however, take place?

Will Banks Fend Off Crypto Competition?

The world’s most powerful institutions are banking and governments. It would be foolish to believe that they will stand by and watch as crypto and blockchain take their place. Taxes must be paid, and the government must be reduced. Nearly every world power has contemplated issuing a digital version of their money through their central bank at this point, mostly to prevent Bitcoin and cryptocurrency from getting too much traction.

To avoid going extinct, the new reality appears to be that centralized authorities will use blockchain technologies. Rather than a self-governing paradise, the future is shaping up to include existing financial institutions and banks as well as blockchain technology. Many central banks, on the other hand, are unsure of what they can contribute. They are, after all, diametrically opposed to Bitcoin’s initial concept, which was to create a decentralized and private means of dealing.

To compete with DeFi systems, a central bank digital currency would need to provide many of the same benefits as crypto. Users may move funds to CBDC accounts, allowing for cheaper costs and fewer middlemen between transactions, thus central banks may need to let commercial banks fend for themselves.

To deliver greater value to their customers, commercial banks and financial services will need to change. The truth is that when the general public gets more knowledgeable about crypto and decentralization, they will see the benefits in the future of money and the internet.

The second option for avoiding being replaced is to outright prohibit crypto, although many people doubt that this will happen. The public favors innovation, and major corporations such as Micro strategy and PayPal have paved the way for a potentially irreversible acceptance of digital money.

The general public is coming to grasp that cryptocurrency is much more than Bitcoin, and that blockchain and DeFi have much broader applications. People will always win out, and what they want most is greater convenience and better answers to their issues.

Will Serious Investors Switch to Crypto and DeFi?

Many ardent investors have been flocking to crypto and DeFi owing to the incredible profits, which may reach hundreds of percent ROI. But there is a subset of long-term investors who see Ethereum’s unchangeable worth as something more than a store of money or a trade coin.

According to a recent poll, the youngest age cohort is the most likely to participate in crypto, with 58 percent of cryptocurrency owners under the age of 34. Bitcoin (the biggest cryptocurrency by market capitalization) is preferred by a staggering 27% of those aged 18 to 34.

Investors in their twenties and thirties are most likely to include Bitcoin and other cryptocurrencies as a significant part of their portfolios, if not the entire portfolio. Furthermore, between the ages of 26 and 40, 54.9 percent of retail investors are. Crypto has piqued the interest of this group of investors in recent times, as it presented exceptional short-term opportunities.

Those aged 65 and up are unlikely to contribute to the emergence of cryptocurrencies, since they are more concerned with securing secure assets to last them into retirement. This age group is less computer savvy and has a low level of trust in digital assets. They’re more inclined to follow the lead of Warren Buffet, a 90-year-old investor with a background in safer blue-chip stocks and mutual funds. In fact, Warren Buffer has repeatedly stated that cryptocurrencies are worthless.

Hence it is safe to say that of the over 200 million crypto users, younger generations are obviously more interested in cryptocurrency ownership and engagement. Asia and China account for a significant share of these demographics.

Cryptocurrencies will not replace banking and finance. However, the more individuals who are educated about the advantages of crypto and decentralization, the more likely they are to reach their full potential.

Over the past few years, we’ve seen a bewildering assortment of new crypto products. DeFi is looking at new methods for us to interact with one another. Many people, like Sarah Austin of Kava Labs, believe DeFi and CeFi will have a strong future as they combine economic solutions. She cites an example of an interview in which she discussed the merging of non-fungible tokens (NFTs) with retail ownership of tangible luxury products. What the confluence between centralized digital money and DeFi will look like remains to be seen.

DeFi, on the other hand, is expected to displace huge areas of traditional finance in favor of simpler and borderless mobile payment systems. Governments and banks will be forced to innovate or risk being left behind.