On this day last year (March 12, 2020), Bitcoin critics thought they had won. Alongside the rest of the financial and commodities market, Bitcoin witnessed one of its wildest sell-off in history, dropping as low as $3775 on some exchanges. 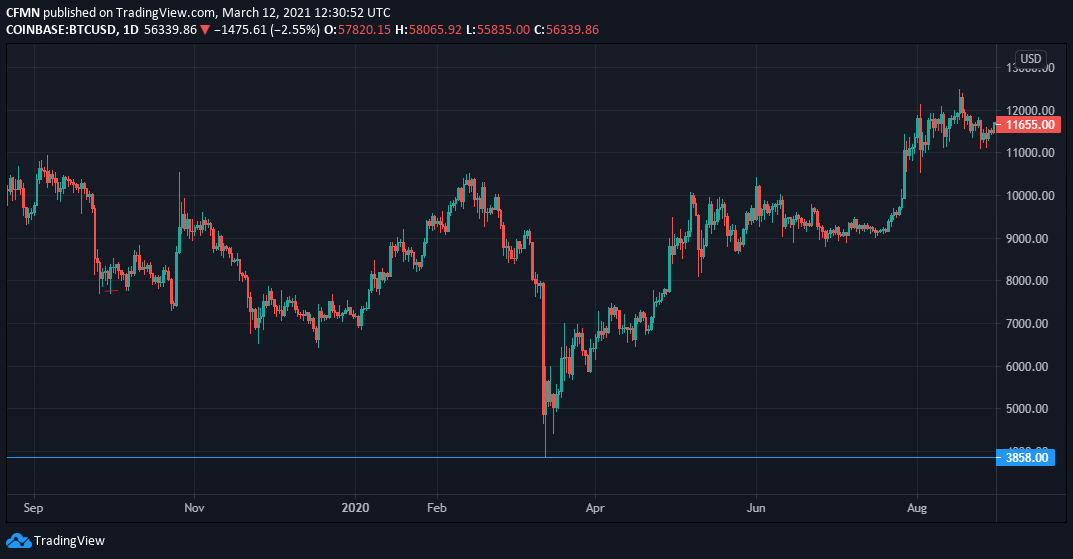 The sell-off was largely attributed to the incoming COVID-19 pandemic as investors sought refuge in cash to weather what turned out to be one of the darkest times in human history.

Before then, Bitcoin proponents preached that the asset was uncorrelated to traditional financial markets but was forced through a humbling experience on March 12 as the supposed ‘safe haven’ crumbled by 60% in the space of 48 hours.

Remarkably, Bitcoin’s recovery since that historic market decline proved that March 12 was one of the greatest buy-in opportunities for anyone brave enough to take the bet.

In finance, there’s the saying that asset prices “take the step up but the elevator down.” Put simply, the price goes up gradually but often declines in the straight line.

Although Bitcoin went down the same way as the rest of the market last year, the leading cryptocurrency lived up to its now-famous status of being the “only asset that takes the elevator up and the stairs down.” Put simply; Bitcoin recovered faster than it declined and right now is looking unstoppable.

Admittedly, a significant portion of Bitcoin’s price increase took place in 2021, with prices jumping from nearly $25,000 to the current all-time high of around $58,400. However, thanks to the last year’s events and progress, Bitcoin has gotten to where it is now.

The Bitcoin halving takes place, reducing the new issuance per block to 6.25 BTC.

MicroStrategy becomes the first publicly-traded U.S company to adopt Bitcoin as its primary reserve asset with a $250 million purchase. Since then, the company has spent almost $2 billion extra on acquiring Bitcoin and setting the pace for other corporations both in the U.S and offshore to follow.

PayPal announces it will allow its customers to buy and sell Bitcoin and four other cryptocurrencies.

Bitcoin breaks its previous all-time high near $20,000, starting an eventful journey into the never-known territory.

Tesla announced it invested $1.5 billion in Bitcoin, sparking a Bitcoin rally above $40,000 for the second time in an already raging bull market.

At this time, Bitcoin is looking completely different from the same asset critics believed was at a dead-end during the March 12 crash. Within the last twelve months, it has transformed from a retail-dominated investment to a treasury-reserve asset for companies and an asset class for institutional entities.

MicroStrategy and Tesla holds it. Fund managers like Paul Tudor Jones and Stanley Druckenmiller supports it. Blackrock has eyes for it. JP Morgan and Goldman Sachs have launched bitcoin-related products, and the largest Bitcoin exchange, Coinbase, is about to IPO.

It will probably take another black swan event (or even something worse) to push Bitcoin back to its former price levels. But even if that happens, people who lived through the last year will have little to no reasons to not see it as an opportunity.

No matter how high or low Bitcoin goes from its, the events on and after March 12, 2020, will almost definitely be remembered for contributing to one of the most epic performances in Bitcoin’s history.