Its price fell 12% last week with the lowest recorded in the last few weeks of $7432 on June 4th and 15% since its 2019 high of $9,097 of 30th May. When even bullish analysts were expecting a new short term bearish trend, Bitcoin spikes up again to touch $8000 another time leaving everyone pretty much confused. 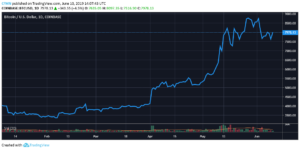 Experts were betting on a new low of $7200 or even further down to retest the $5800-6400 again, surely not expecting a new rise back to last week’s levels before the drop.

A couple of contexts should be taken into consideration with regards to the market in the next few weeks and how they can affect price and trend in the short term.

First of all, Facebook coin due to launch at the end of June is expected to make a massive impact on the whole crypto market but especially Bitcoin.

Although the GlobalCoin presents itself as the Bitcoin-beater coin, it will actually help the first cryptocurrency grow. Whenever there is some good or bad news in the space, BTC is the first coin to be affected.

Despite being criticized for being too centralized, the Facebook coin is suitable for widespread mass adoption of the digital currencies. With its over 2.38 billion monthly active users as of March 31, 2019, no promotion for the crypto market could be better.

Bullish experts and analysts are expecting Bitcoin price to finally reach $10K by the end of June/early July, on the push coming from GlobalCoin. I would bet on that.

A second consideration is purely technical and the way Bitcoin reacts to bearish trends. The recent sell-off that took the price down to $7,511 on Sunday early hours does not seem to have impacted much non-expert traders who seem to now HODL and not panic sell. A trend that we saw quickly happening during 2018 bear market.

Of course, we also need to keep these levels for a while, a few days, to be in a full recovery mode.

With Bitcoin, also most alts are seeing some recovery with Litecoin topping them all with a rise of 7.75% in the last 24hrs.