Bitcoin price performance was against many predictions. However, it is no surprise as several outlooks pointed at the asset failing to impress during November. The analysis stated that the apex would retest and flip the $21k resistance before the downtrend hits.

A look at the chart shows that it happened this way. It also predicted that the low would be around $16k and $14k. This happened as BTC dipped to a low of $15,479. After these events, we noticed small uptrends.

As a result, the last two weeks of November were bullish. This may negatively impact price action during the first few days of December. There are other factors to consider. One such are fundamentals.

The FOMC Will Meet This Month

One of the most dreaded events in finance is the meeting of the Federal Open Market Committee. This is because this body is in charge of setting interest targets. This means that after the meeting, there is a chance they announce an increase in interest rates.

Based on previous price relations to such announcements, we may expect an impact on the value of the asset under consideration. It is also important to note that an increase could cause a notable drop in value, while a reduction could lead to more price increases.

Aside from this, one of the days that many are anticipating is December 13. This is when the concerned authorities will release the Consumer Price Index. Like the interest rates, it could also impact bitcoin’s price.

Last month, the CPI had little or no impact on prices, and some cryptocurrencies tested key resistance in response. For example, BTC staged a massive recovery from the previous low. After the release, the coin surged from $16k to a high of $18,150.

Although it experienced rejections after its peak, it closed the intraday session with gains exceeding 10%. One reason for such a reaction is that the increase in inflation seems to have slowed down.

It is hard to guess if the good news will also have the same effect this month. Let’s see how prices play out. Nonetheless, let’s look at other factors.

A look at the monthly heatmap, we concluded that November was the second-best period for the asset under consideration. Unfortunately, the previous month ended with a loss exceeding 17%; the second-worst performance of the year. 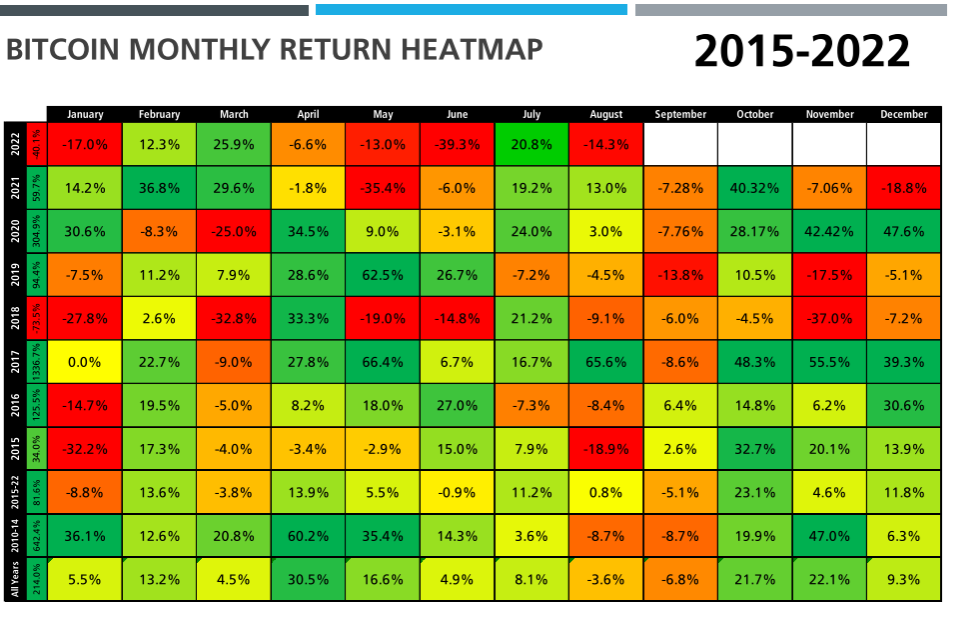 The question at this time is if December would turn out the same. It is worth noting that BTC had its biggest drop of the period last year. It lost more than 18%. This makes it the third time since bitcoin became a tradable asset in 2010 that it ended the eleventh month with a loss.

It is also no news that the period under consideration is considered one of the most bearish times. There is a theory that the cryptocurrency sees massive withdrawals as traders take profit.

However, on average, BTC gains more than 9% which makes December the fifth most bullish month of the year. It’s hard to say if this 30-day session will end in profit or loss as there is no set pattern.

The last time bitcoin recorded losses, it was followed by another. It remains to be seen how prices will perform. To gain more insights, we turn to the charts.

Recall that a previous analysis pointed to a pattern that started in May. It’s hard to say if this trend will continue this month. Nonetheless, if this happens, the mark to keep an eye on is the $17k barrier.

In recent times, we noticed the trend play out on the $21k resistance. After three attempts at the mark, a massive downtrend followed. With a focus on the next twenty-seven days, we are at the start of this new level.

This is so as  BTC just tested the $17k resistance for the first time. There are indications that the asset will retrace below the mark under consideration. One such is the candlestick. A closer look at the current intraday candle, we notice it is a hammer.

It appeared after bitcoin enjoyed a more than two-day uptrend. Nonetheless, this candlestick appears at the end of a bullish round and indicates an impending correction. We may see the apex coin become bearish within the next 48 hours.

Its hard to say how low it will dip or how long before a rebound. We may conclude that the $17k will flip on the second trial and the largest cryptocurrency by market cap may surge as high as $18k.

Whether the final attempt will take place this month is a question only will answer. However, the previous statement points to the fact that bitcoin will experience a period of low volatility during the first few days. A period of notable downtrends will precede the low-trading timeframe. We know this from the indicators.

Bitcoin had its bullish divergence a few days back. This heralded the start of the increases that ensued. While many celebrate this feat, others are worried. The main cause of concern is the Moving Average Convergence Divergence.

It’s hard to say exactly when this will happen. However, there are clear indications that this may take place within the next seven days. The decrease in the Relative Strength Index is another indication of an impending bearish round. Let’s examine some key levels to watch.

The highlighted levels are the key levels to watch. The most concerning of all are the supports. They are critical as a flip would guarantee new lows. The first on the list is $16k barrier. The last time it broke, BTC recorded another low for 2022.

Currently trading at $17k, a little change in trajectory could see the mark flip. The next level to watch is the $15k barrier. A retest means that there was a massive downtrend and a flip could send the asset under consideration to a low of $14k.

On the flip side, we may see further attempts at key resistance. The first on the list is the $17k barrier. Although trading around it, based on previous price movements, we may see it lose the mark and regain before a final break out.

There are huge chances that the $18k resistance will also break. The biggest and toughest negative barrier is the $21k